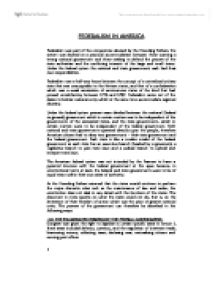 FEDERALISM IN AMERICA Federalism was part of the compromise devised by the Founding Fathers, the system was devised as a practical accommodation between those wanting a strong national government and those seeking to defend the powers of the state authorities and the conflicting interests of the large and small states. Under the federal system the national and state governments each had their own responsibilities. Federalism was a half-way house between the concept of a centralized unitary state that was unacceptable to the thirteen states, and that of a confederation which was a weak association of autonomous states of the kind that had proved unsatisfactory between 1776 and 1787. Federalism arose out of the desire to bolster national unity whilst at the same time accommodate regional diversity. Under the federal system powers were divided between the national (federal or general) government which in certain matters was to be independent of the governments of the associated states, and the state governments, which in certain matters were to be independent of the federal government. Both national and state governments operated directly upon the people, therefore American citizens had to obey two governments - their state government and the federal government. ...read more.

(D) THE CONCURRENT POWERS OF THE FEDERAL AND STATE GOVERNMENTS In some areas such as taxation both the federal and the state governments can legislate simultaneously (E) THE POWERS SPECIFICALLY DENIED TO THE FEDERAL GOVERNMENT; There are some things which the constitution forbids the federal government to do for example, taxing exports, creating titles of nobility or favouring the ports of one state over another. (F) THE POWERS DENIED TO THE STATES; Article 1 section 10 restricts the activities of the state governments in certain fields, they cannot, for example, enter into treaties with foreign powers, nor can they impose import or export duties. (G) THE RESERVED OR RESIDUAL POWERS OF THE STATES; The tenth amendment was included as part of the Bill of Rights as the price for the ratification of the Constitution, it stated that anything not delegated to the Federal government should be left to the authority of the states or to the people. Many of the Founding Fathers believed that all the powers not expressly given to the federal government would automatically reside with the state governments. The Framers of the constitution were divided over the degree of power to be given to the central government, some wanted ...read more.

DUAL FEDERALISM. (1780s - 1920s) - an era in which the state governments had significant power. 2. COOPERATIVE FEDERALISM (1930s- 1920s) - an era in which the federal government became more powerful, sometimes at the expense of the states. This is associated with Democratic presidents Roosevelt, Truman, Kennedy, and Johnson, during this era Washington gave grants to the states and stipulated how the money was to be spent. ]. ] 3. NEW FEDERALISM (1970-present) -During this era wherever possible there was an attempt to devolve more power back to the states, this is associated, with Republican Presidents like Reagan and Bush, even Clinton, a Democratic President once declared that the era of big government was over. The Consequences of Federalism: � Great variations in state laws on issues such as when people can marry, drive etc � Great varieties in penalties for breaking the law � A complex legal system with both state and federal courts � Each state has its own laws, courts and constitution � A complex tax system where Americans pay both state and federal taxes � Political parties are decentralised and largely state-based � Great regional diversity � Elections are frequent and numerous and are state based and under state control ?? ?? ?? ?? 1 ...read more.