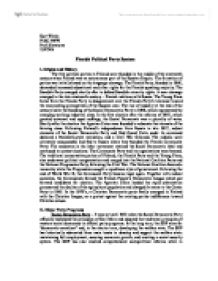 I. Origins and History

The first political parties in Finland were founded in the middle of the nineteenth century when Finland was an autonomous part of the Russian Empire. The formation of parties was initially based on the language cleavage. The Finnish Party, founded in 1860, demanded increased educational and other rights for the Finnish speaking majority. The Swedish Party emerged shortly after to defend Swedish minority rights. A new cleavage emerged in the late nineteenth century – Finnish relations with Russia. The Young Finns broke from the Finnish Party in disagreement over the Finnish Party’s tolerance toward the encroaching prerogatives of the Russian czar. The rise of industry at the end of the century led to the founding of the Social Democratic Party in 1899, which represented the emerging working industrial class. In the first election after the reforms of 1907, which granted universal and equal suffrage, the Social Democrats won a plurality of votes. Shortly after the election the Agrarian Union was founded to advocate the interests of the farming class. Following Finland’s independence from Russia in late 1917, radical elements of the Social Democratic Party and Red Guard Units under its command declared a Bolshevik-style revolution, and a Civil War followed. The radicals were ultimately unsuccessful and fled to Russia where they founded the Finnish Communist Party. The moderates in the labor movement retained the Social Democratic label and continued to contest elections. The Communist Party and its organizations were banned.  The traditional conservative parties of Finland, the Finnish Party and the Young Finns, also underwent political reorganization and merged into the National Coalition Party and the National Progressive Party, following the Civil War. The National Coalition favored a monarchy while the Progressives sought a republican style of government. Following the end of World War II, the Communist Party became legal again. Together with radical socialists, the Communists formed the Finnish People’s Democratic League which put forward candidates for election. The Agrarian Union heeded the rapid urbanization process and the decline of the agricultural population and changed its name to the Center Party in 1965. In the 1970’s, a Christian Democratic party finally emerged in Finland with the Christian League, as a protest against the existing parties indifference toward Christian values.

Social Democratic Party – It was not until 1952 when the Social Democratic Party officially eschewed the principles of Karl Marx and adopted the traditional principles of western social democracy in official party programs. In the long term, the SDP aims for “democratic socialism” and, in the shorter term, developing the welfare state. The SDP has historically advocated three main tenets to develop and support the welfare state: maintaining full employment, securing economic growth, and creating a social security system. The SDP has also enacted comprehensive sociopolitical reforms while in government during the 1970’s and 80’s in order to curtail the generous agricultural policies, which the SDP sees as the biggest obstacle to industrial and economic growth.

National Coalition – Traditional conservatism in Finland has been represented by the National Coalition Party. However, starting in the 1970’s the Coalition has reformed its program somewhat to become more liberal. “Traditional values” are not emphasized as much, and the party has become more open towards welfare policies which involve transfer payments. However, the Coalition regards private ownership and a free market economy as the foundations of economic development. The political rise of the Christian League has also coincided with the Coalition’s abandonment of its traditional moral values.

Center Party – Upon its founding, the central aim of the Center Party, initially the Agrarian Union, was to attend to the interests of the farming population. With the rapid industrialization that followed World War II, and the decrease of the farming population, the newly christened Center Party sought to appeal to larger sections of population. Placing itself firmly into the center of Finnish politics, it criticized the socialist aims of the SDP while pointing out the problems caused by the capitalistic policies of the National Coalition. The Center Party also began to advocate for the idea of decentralization of power, whether it be economic or political. They have promoted ideas of increased provincial self-government as well as sending important political issues to a referendum. Although they place themselves firmly in the middle of the ideological spectrum, the Center Party is associated with more liberal rather than socialist economic positions, as they favor few restraints on the economic and industrial sector.

Shortly after independence, the only true mass party which sought as wide a membership as possible was the SDP. Only the SDP engaged in organized political education. All of the other parties, including the National Coalition were cadre parties with small and inactive memberships. Currently, when measuring activity and organization, all of the major parties can be classified as mass parties. The lowest level of party organization are party members. The local organizations are formed by the rank-and-file and are usually formed on a regional basis. In addition to this, the SDP has occupational and workplace associations. Each party requires that a candidate applying for membership approve the principles and aims of the party and not be a member of any other party. The district organization of the political parties is based on the country’s division into sixteen constituencies. Each party has one or two organizations in every constituency. In the district organization, the highest authority in decision making is the district convention to which the local organizations send their representatives. The role of the district organizations is to join together the local organizations and the central leadership of the party. Above the districts there are the central party organs, the highest of which is the party convention. The conventions of the National Coalition and Center Party meet every two years while the SDP convention meets every three years. The mission of the party convention is to make decisions on important questions of principles and policy positions. The convention adopts the rules and programs of the party and elects members of the representative body, which exercises power in the period between party conventions. The socialist parties generally have a more rigid party organization in which administration is centralized but decision making is based on the activity of the members and an extensive organizational democracy. All the questions concerning the program are thoroughly discussed on the local level. It is quite common that important questions are referred to the members for decision by a general vote. In recent years, the differences between the socialist and non-socialist parties have lessened recently. The non-socialist parties have been trying to improve party discipline and produce a more uniform party line at lower levels. Organizational democracy is increasing as well. In nominating candidates for election, the National Coalition has started using the same method as the SDP, by arranging a general vote by the members for nominating candidates.

IV. Parties in the Political System

The two hundred member unicameral parliament of Finland is known as the Eduskunta. From the very beginning parties have attended to many tasks in the legislature including political education and mobilization of voters, nomination of candidates for election, and organization of parliamentary work. In each party, the parliamentary group also acts as an organ which controls the activity of the party’s individual members of the legislature, which strengthens the role of parties at the highest national level of decision making. The primacy of parties has also been reinforced by legislation. In the Election Act of 1969, the priority of the parties to enforce nomination of candidates in parliamentary groups was officially confirmed. The proportions of the parties in Parliament mainly follow the distribution of votes in the election. The d’Hondt rule for allocation of seats and small constituencies makes the electoral system unfavorable to small parties. The larger parties get more seats in the Eduskunta than their share of votes. This forces the smaller parties into electoral alliances; whether among themselves or with bigger parties. However, the number of small parties in the Finnish party system is fairly large because without a minimum vote barrier, the proportional representation and the opportunity of electoral alliance make it possible for them to win a seat in parliament even with a fairly low number of votes. The Constitution of Finland grants the president a substantial amount of power, but it can still be said that Finland has a parliamentary system of government. The members of the cabinet must enjoy the confidence of Parliament and are responsible to Parliament for their actions. Since the beginning of independence and the new Constitution was passed, this has implied that the parties had an important role in the formation of governments. To make sure the government maintained the confidence of a majority of Parliament, the cabinet had to be composed of the politicians of those parties which were in the majority in Parliament. As a result, the ministers were usually committed to some parties, or directly chosen by parties. Participation in the cabinet of Finland is not divided according to the proportions of seats in the legislature. The fragmentation of the party system means that a government must consist of at least two parties to enjoy the confidence of a majority of the Eduskunta.

The current Prime Minister of Finland is Matti Vanhanen, the chairman of the Center Party. Following the most recent elections to the Eduskunta in 2003, the Center Party emerged with the most seats in the legislature with 55. The SDP is the second largest party with 53. Together with the Swedish People’s Party, the Center and SDP formed a coalition which enjoys a majority of votes in the Eduskunta. The National Coalition is officially the main opposition, winning 40 seats in the legislature. The Green League of Finland was notably absent from the coalition, even though they gained three seats to boost their total to 14. The Greens of Finland became the first Green Party of Western Europe to join a coalition government in 1995, and continued serving in the next government with the leading SDP until the 2003 elections.

Grofman, Bernard, and Arend Lijphart. The Evolution of electoral and party systems in the Nordic countries. New York: Agathon, 2002.