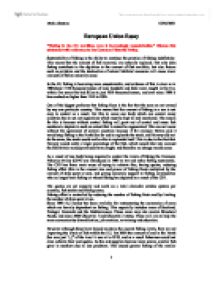 &quot;Fishing in the EU maritime area is increasingly unsustainable.&quot; Discuss this statement with reference to the Common Fisheries Policy.

European Union Essay "Fishing in the EU maritime area is increasingly unsustainable." Discuss this statement with reference to the Common Fisheries Policy. Sustainability of fishing is the ability to continue the practice of fishing indefinitely. This means that the amount of fish removed, are naturally replaced. Not only does fishing contribute to the depletion in the amount of fish available, but also factors such as pollution and the destruction of natural habitats/ resources will cause lower amounts of fish to naturally occur. In the EU fishing is becoming more unsustainable, and evidence of this is clear as in 1985about 1750 thousand tonnes of cod, haddock and hake were caught in the EU, within five years this had fallen to just 1050 thousand tonnes, and ever since 1990 it has reached no higher than 1150 in 1995. One of the biggest problems that fishing faces is the fact that the seas are not owned by any one particular country. ...read more.

Fishing effort is controlled by reducing the number of fishing fleets and by limiting the number of days spent at sea. Since 1993 EU money has been available for restructuring the economies of areas which are heavily dependent on fishing. This especially includes areas of Scotland, Portugal, Denmark and the Mediterranean. These areas may also receive Structural Funds, and since 2000 Objective 1 and Objective 2 status. These will aim to help the areas economies by diversification, job-creation, re-training and education. However although these have helped maintain the current fishing levels, they are not improving the levels of fish within the EU. By 2000 the amount of cod in the North Sea was just 1/10th of the level it was at in 1970, and as a result fishermen could not even achieve their cod quotas. As the cod supplies became more scarce, smaller fish grew in numbers due to less predators. ...read more.

As a result of receiving support from the EU diversification is occurring which is causing the fishing industry in those areas to be abolished, or at the very least in decline. In the long term this means that the fishing industry is going to take a long time to recover from the current slump. Even if the stocks of fish do increase and the EU increase the quotas and fishing effort, it is likely to take a long time for the fishing industry itself to be able to increase again to its former levels of 1970. In conclusion to this statement I believe that unless drastic measures are taken, beyond the current measures which are being taken by the CFP I believe that fishing in the EU is becoming increasingly unsustainable to the extent that it may never recover. However with tight regulations introduced by the CFP, and a change in fishing techniques the industry may be able to achieve a harmony with the environment and once again become sustainable. Sources: Geography for A2 Clive Hart http://europa.eu.int/comm/fisheries/doc_et_publ/cfp_en.htm Mark Johnston 01/05/2007 1 ...read more.