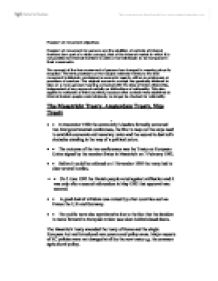 Freedom of movement objectives Freedom of movement for persons and the abolition of controls at internal frontiers form part of a wider concept, that of the internal market in which it is not possible for internal frontiers to exist or for individuals to be hampered in their movements. The concept of the free movement of persons has changed in meaning since its inception. The first provisions on the subject referred merely to the free movement individuals considered as economic agents, either as employees or providers of services. The original economic concept has gradually widened to take on a more general meaning connected with the idea of Union citizenship, independent of any economic activity or distinctions of nationality. This also applies to nationals of third countries, because after controls were abolished at internal borders people could obviously no longer be checked for nationality. ...read more.

The Maastricht treaty amended the treaty of Rome and the single European Act and introduced new powers and policy areas. Major aspects of EC policies were not changed at all by the new treaty e.g. the common agricultural policy. The treaty went into effect on 1 November 1993.The European Economic Community- renamed the 'European Community' under the Treaty of Maastricht-takes a broader approach than the other two Communities. Its task was to mould the Member States into a single Community embracing every sector of the economy. It covered key areas such the free movement of goods and workers, freedom of establishment and the freedom to provide services, the free movement of capital and payments, competition policy, economic and monetary policy, agricultural policy, transport policy, environmental policy, research and technology and industrial policy. ...read more.

The countries concerned in the enlargement are Bulgaria, Cyprus, Estonia, Hungary, Malta, Lithuania, Poland, the Czech republic, Romania, Slovenia, Slovakia and Turkey. Although the negotiations began in March 1998 the enlargement will take place in stages and it is possible the first new Member States may join as soon as 2003. To become a member each country must comply with the rules laid down by the Copenhagen council in 1993. Nice A most recent Intergovernmental Conference opened in February 2000 and completed its work in Nice December 2000. The UK and Ireland were not part of the "Schengen" agreement. Since it has integrated into the treaty, both countries can opt in, wholly or in part. Amsterdam confirmed that the UK and Ireland would not be forced to participate in any measures in the field of visa, asylum and immigration policy and free movement of persons. ...read more.