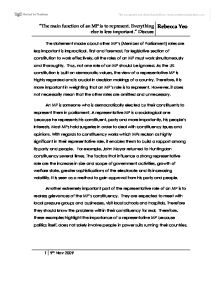 The statement made about other MP's (Member of Parliament) roles are less important is impractical. First and foremost, for legislative section of constitution to work effectively, all the roles of an MP must work simultaneously and thoroughly. Thus, not one role of an MP should be ignored. As the UK constitution is built on democratic values, the view of a representative MP is highly regarded and is crucial in decision makings of a country. Therefore, it is more important in weighting that an MP's role is to represent. However, it does not necessarily mean that the other roles are omitted and unnecessary. An MP is someone who is democratically elected by their constituents to represent them in parliament. A representative MP is a sociological one because he represents his constituent, party and more importantly, his people's interests. Most MPs hold surgeries in order to deal with constituency issues and opinions. With regards to constituency works which MPs reckon as highly significant in their representative role, it enables them to build a rapport among its party and people. ...read more.

These models mean that the MP seems to have a strong party focus by which they represent their constituency. Also as the governing party has the majority of MPs in parliament, this will allow them to dominate. Mps will all bend backwards in order to please their government, due to prospects of climbing the career ladder. The party has been described as an MP's "life support system" as it's their ticket into government, and a career in politics. These MP's loyally support their party, even if it means suppressing their own personal views or ignoring the views of their constituents. The role of the watchdog comes in when there are disadvantages of the representative role of an MP. Traditionally, MPs within Parliament have had the role of holding government accountable through various debates, committees, question time and voting. This is crucial to avoid a corrupt government. Debates will force the government to explain and defend its policies and allow MPs to express dissenting views, this happened in the debate over the war in Iraq. ...read more.

Although it is argued that MPs can draft their own Private Members Bills, these bills often too controversial. Moreover, the lack of governmental support, time and the use of hostile tactics accentuate failure in passing the Private Members Bills. Many MPs waste their time filibustering to prevent a vote from being taken and the government can also easily disapprove through the whip system. In conclusion, it is agreeable that the main function of an MP is to represent. The UK constitution cannot operate effectively if one role of an MP is omitted. Ranking them in priority, the representative role will be first due to the fact that democracy plays an important part in British politics. The equal right of the public is a controversial issue and hence, the only fair way for the public to be heard is by MPs representing both their interest and grievances. Next in priority will be the role of a watchdog because scrutiny prevents corruption and promotes transparency. ?? ?? ?? ?? "The main function of an MP is to represent. Everything else is less important." Discuss Rebecca Yeo 1 9th Nov 2009 ...read more.