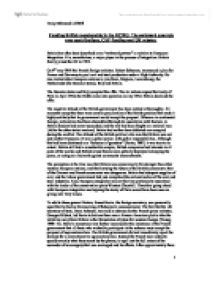 Funding British membership in the EC/EU: The awkward quarrels over contributions, CAP funding and UK rebates.

Funding British membership in the EC/EU: The awkward quarrels over contributions, CAP funding and UK rebates. Britain has often been described as an "awkward partner" in relation to European Integration. It is, nevertheless, a major player in the process of integration. Britain finally joined the EC in 1973. On 9th may 1950 the French foreign minister, Robert Schuman, announced a plan for France and Germany to pool coal and steel production under a High Authority. He also invited other European nations to join them, Belgium, Luxembourg, the Netherlands (the Benelux states), Italy and Britain. The Benelux states and Italy accepted the offer. The six nations signed the treaty of Paris in April 1952; the ECSC came into operation in July 1952. Britain declined the offer. The negative attitude of the British government has been looked at thoroughly. All accounts accept the there were certain peculiarities of the British position that made it highly unlikely that its government would accept the proposal. Whereas in continental Europe, nationalism had been discredited through its association with fascism, in Britain fascism had never succeeded, and the war had been fought as a national war. ...read more.

While London was contributing heavily to farm subsidies, which swallowed up half of the EU budget, it only recouped a 7% share of the receipts. The developing position was unacceptable to the Labour government. The foreign secretary, David Owen, told the house of commons that the situation whereby the "United kingdom has the third lowest per capita gross domestic product in Community" yet was already the second highest net contributor to the budget "cannot be good for the community any more than it is for the United Kingdom, and promised that the government would "be working to achieve a better balance, especially in relation to agricultural expenditure, to curb the excessive United Kingdom contribution" (Hansard, 14 nov, 1978, col 214). Unfortunately, for the labour government, it never had the opportunity to work for a better balance because it lost office in the June 1979 election to the conservatives under the leadership of Margaret Thatcher. The new government soon took up the same theme concerning the budget. Shortly after coming into office, Sir Geoffrey Howe, the Chancellor of the Exchequer, announced that the size of the problem was far greater than the Conservatives had realised while in opposition. ...read more.

He went on to attack the idea of the juste retour which he said did not exist and should not exist: "the simple taxpayer cannot refuse to pay taxes only because he does not get back what he paid in". Commissioner Liikanen had a more detached perspective. He saw the British rebate arrangement as underlying the problems with the national net budgetary contributions in Germany, the Netherlands, Sweden and Austria. He expected countries to want "a generalised correction system" but the Commission had proposed not opening the rebate discussion until after enlargement when it would be unavoidable. While the UK only funds 13% of the budget, compared with its share of Union Gross National Product of 16%, British ministers point out that only 8% of the EU budget is spent at home, making the UK the lowest per-capita recipient of all member states. They also remind colleagues that, without the rebate, they would be financing 21% of the Union's spending. Even with the rebate, the UK is the Union's fifth-largest contributor while measurements of national wealth put it ninth in the EU league table. The UK still pays twice as much as France, Italy, Belgium and Luxembourg. ...read more.