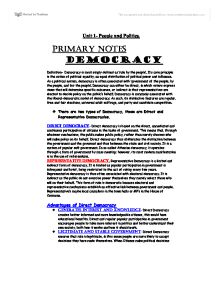 Unit 1- People and Politics. PRIMARY NOTES Democracy Definition- Democracy is most simply defined as 'rule by the people'. Its core principle is the notion of political equality, an equal distribution of political power and influence. As a political system, democracy is often associated with 'government of the people, by the people, and for the people'. Democracy can either be direct, in which voters express views that will determine specific outcomes, or indirect in that representatives are elected to decide policy on the public's behalf. Democracy is commonly associated with the liberal-democratic model of democracy. As such, its distinctive features are regular, free and fair elections, universal adult suffrage, and party and candidate competition. * There are two types of Democracy, these are Direct and Representative Democracies. DIRECT DEMOCRACY- Direct democracy is based on the direct, unmediated and continuous participation of citizens in the tasks of government. This means that, through whatever mechanisms, the public makes public policy, rather than merely chooses who will make policy on its behalf. Direct democracy thus obliterates the distinction between the government and the governed and thus between the state and civil society. It is a system of popular self-government. In so-called Athenian democracy, it operates through a form of government by mass meeting; however, its most modern manifestation is in the use of referendums. REPRESENTATIVE DEMOCRACY- Representative Democracy is a limited and indirect form of democracy. It is limited as popular participation in government is infrequent and brief, being restricted to the act of voting every few years. Representative democracy is thus often associated with electoral democracy. It is indirect as the public do not exercise power themselves they merely select those who will on their behalf. This form of rule is democratic because electoral and representative mechanisms establish an effective link between government and people. Representative's maybe local councilors in the town halls or MP's in the House of Commons. ...read more.

Many civil rights campaigners are calling for a written constitution, which they argue is the only way too protect the rights of citizens fully. On Balance, despite some drawbacks, the pattern of reform over recent years dose point to the UK becoming more democratic. Referendums Definition- A referendum is a vote in which the electorate can express a view on a particular issue of public policy. As such, it provides the public with means of directly influencing government policy, although some referendums are advisory rather than binding (in theory at least, this applies to all referendums in the UK, as Parliament is sovereign). Referendums are therefore a device of direct democracy, although they are typically used to supplement, rather than replace, representative democracy. * Referendums differ from elections as an election is a vote for an MP or a Political Party. A Referendum is a device for Citizens to voice there opinions. Examples of Referendums Held > European Community Membership Vote 1975 - The Labour Government of the day was itself split on whether Britain should remain a member. Prime Minister Hard Wilson therefore ordered the referendum to settle the issue and to avoid the collapse of his government. During the Campaign ministers were free to oppose the official line that Britain should remain a member. The decisive yes vote ensured the governments survival. > The Good Friday Agreement 1998 - This had two purposes, first to get supports for the Northern Ireland peace process and second to get endorsement for devolved powers to Northern Ireland from London. It was necessary to secure not just a Yes vote, but a decisive one to ensure that all sections of Northern Ireland were in favour. The Yes vote of over 70% was considered good enough. This put real pressure on the political leaders of Northern Ireland to accept the Good Friday Agreement. > Devolution for Scotland and Wales 1997-Voters in Scotland were asked two questions. ...read more.

Using the list-based system described above resulted in parties such as the Greens and UKIP gaining national representation for the first time ever in 1999. In 2004 UKIP managed to win 12 seats to the European Parliament, this would not have been possible without using a proportional electoral system. The fact that some List systems are closed in the UK has been a source of some concern because it gives the leadership of political parties the power to determine where an individuals name appears on the list. This system has also ended the direct link between the constituent and the MEP, for example in London 9 MEPs are returned. Single Transferable Vote In STV there are multi-member constituencies (in the Northern Ireland Assembly, each returns 6 members). Parties put up as many candidates as there are seats to fill in each constituency. The Single Transferable Vote (STV) is a system of preferential voting designed to minimize wasted votes and provide proportional representation while ensuring that votes are explicitly expressed for individual candidates rather than for party lists. It achieves this by using multi-member constituencies and by transferring all votes that would otherwise be wasted to other eligible candidates. Seats are allocated according to a quota system. If any candidate reaches the quota on first preferences, then the candidate is elected. STV initially allocates an elector's vote to his or her most preferred candidate and then, after candidates have been either elected or eliminated, transfers surplus or unused votes according to the voter's stated preferences.STV is used in local and assembly elections in Northern Ireland and also for elections in Scotland. Supplementary Vote The Supplementary Vote system is similar to the Alternative Vote system, the key difference being is that under the Supplementary Vote voters are limited to indicating a first and second preference. A candidate who receives more than 50% of the first preference votes on the first count is elected. If no candidate reaches 50% of the vote the two candidates with the highest number of votes are retained and the rest of the candidates are eliminated. ...read more.