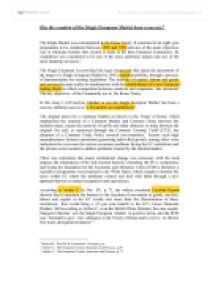 Has the creation of the Single European Market been a success?

Has the creation of the Single European Market been a success? The Single Market was contemplated in the Rome Treaty. It consisted of an eight-year programme to be completed between 1985 and 1992 and one of the main objectives was to eliminate barriers that existed to trade in the then European Community. Its completion was considered to be one of the most ambitious targets and one of the most enduring successes.1 The Single European Act provided the legal framework that made the attainment of the target of a Single European Market by 1992 a realist possibility, through a process of harmonisation for existing legislation. The mobility of capital, labour and goods and services became reality in simultaneous with the establishment of a new European trading block in which competition between countries and companies has increased. The key objectives of the Community are in the Rome Treaty. In this essay I will analyse whether or not the Single European Market has been a success, defining success as 'a favourable accomplishment'. The original plans for a Common Market as known in the Treaty of Rome, which emphasized the creation of a Common Market and Customs Union between the member states, meant the removal of tariffs and other obstacles to trade between the original Six and, as expressed through the Common External Tariff (CET), the adoption of a Common Trade Policy towards non-members.2 Factors such high unemployment, business operations generating unlevelled growth, among other, were understood to overcome the serious economic problems facing the EC institutions and the private sector needed to address problems created by the internal market. ...read more.

Rome Treaty too many people in the original Six depended of farming; around 25 per cent of the total labour force was employed in agriculture. This was compared to less than 5 per cent in the United Kingdom having to do a lot with the fact that farms in Britain had been restructured by the enclosures of the eighteenth century. These developments had pushed workers out of the British agriculture. But at the same time the process of industrialization attracted rural workers into factories to where they were attracted by higher wages. In turn, in the continent such factors had not operated to the same degree and the agriculture labour force remained worse off than most groups. Many farms were economically small and the effects of drought, flood or livestock disease very often resulted in a smaller production than that hoped for by the farmers. In Western Europe there was a tendency for a relative fall in demand for farm products with farming incomes behind the incomes of groups engaged in non-farming occupations. Under Article 38 of the Treaty, the development of a Common Market for agricultural goods should be accompanied by the establishment of a Common Agricultural Policy, which was designed to ensure that a Common Market could extend to agriculture and agricultural products; to ensure, a fair standard of living for the agricultural population, to stabilize markets, to guarantee regular supplies and to ensure reasonable prices for consumers. ...read more.

Nevertheless, economic development in the EU has been a result of many factors and not solely of the Single Market programme. In any case, positive indications do exist that sharp increases were registered during that period, in direct inward investment and in merger and acquisition activity. The flows of intra-EU trade appear to have been affected by the reduction of barriers .9 An assessment by the Commission in 1996, concluded that the Single Market Programme had created not a enormous but significant benefit including 1.1 to 1.5 percent higher income, more jobs (300.000 to 900.00), 1 to 1.5 percent lower inflation, higher investment, intensified intra-EU trade, greater economic convergence among EU regions and reductions in road and other transport costs 10. In the opinion of political commentators, the single market that was launched through a formal and broad programme of legislative measures should be seen as a continuing process in economic integration. A major success of the Single Market programme was the eradication of barriers between national markets. Controls have been removed on the physical movement of goods at EU internal boundaries. By the end of 1992, the EC had adopted about 95% of the measures under the Single Market Programme and an liberalization of capital movements increasing capital flows occurred further integrating financial markets. A challenge facing the Community is the increasing globalisation trend through which many of the world's markets are becoming one huge trading centre. Nonetheless, the Single Market Programme has been considered as a successful model in international trade. ...read more.

This is a thorough descriptive essay which does a very good job of summarising evidence from various sectors. However, a really outstanding essay would offer a bit more by way of analysis. Which sectors were more of a success and why? Who were they a success for? Why have results been disappointing to some? The factual information here is very well presented, but it could do with a bit more argument.