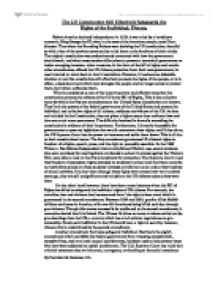 Has the US Constituion Protected Individual Liberties?

The US Constitution Still Effectively Safeguards the Rights of the Individual. Discuss. Before America declared independence in 1779, it was ruled by a hereditary monarch, King George the III, who, in the eyes of the American people, acted like a dictator. Thus when the Founding Fathers were devising the US constitution, they did so with a fear of the previous tyranny that ruled them at the forefront of their minds. The original constitution was predominantly concerned with how the government should work, and what measures should be taken to prevent a tyrannical government or leader emerging; however, other measures, in the form of the bill of rights and certain other amendments, offered the US citizens protection from their new government, in case it started to revert back to how it was before. However, it has become debatable whether or not this constitution still effectively protects the rights of the people, or is in effect, a dead document which now strangles the people and no longer serves to protect them, but rather, suffocates them. What is considered as one of the most important and effective ways that the constitution protects the citizens of the US is the Bill of Rights. This is the collective name by which the first ten amendments to the United States Constitution are known. They limit the powers of the federal government of the United States and protect the individual and collective rights of all citizens, residents and visitors of the US. ...read more.

Justice Brennan wrote in 1972 that he would not expect any state or government to pass any legislation that violates the principle of 'no cruel or unusual punishment'. However it is questionable whether or not the death penalty in itself goes against this principle. Perhaps this is why the federal government shies away from dealing with the subject and leaves it up to State governments to decide their own stances on it. Similarly, the issues that have been made public about Guantanamo bay and Rendition, that the USA is aware of and continues to let happen, should surely be in violation of the eight amendment. Clearly, this particular amendment needs to be clarified if it is to truly protect the citizens of the US from their government. In the same way, Judicial Interpretation has had profound implications for individuals who have looked to the courts to use the constitution as protection. In one of the most prominent cases; Roe v. Wade, it was argued that the woman's right to privacy (though privacy nor abortion is explicitly mentioned in the constitution) should give her the right to choose whether or not she wanted an abortion. The judiciary ruled in favor of Pro-Choice as they felt that privacy is a basic human right, and as such is protected by virtue of the 9th Amendment. Therefore the case won and this was seen as a major example of people exercising their rights and now women across America have the option of abortion if they want it. ...read more.

In addition, other formal amendments to the constitution help to effectively safeguard individual liberties today. In 1870 suffrage denied on account of race, was abolished. Women's right to vote was introduced in 1920 and the voting age was lowered to 18 in 1971. This helped extend the rights of nearly all Americans. Yet the 18th amendment is an example of how the constitution could effectively remove people's rights. It took away the right to sell or make and therefore consume alcohol and evidence of how ineffective and offensive to people's freedom it was, is the fact that it actually had to be repealed through a further amendment; the 21st. In conclusion, the argument of whether or not the constitution effectively safeguards the rights of the individual is always going to be open to debate due to the amount of evidence in support of each side. I personally feel that in many areas it offers the American people protection; however, the constitution is used and exploited by the government to their own advantage and at the individual's expense. It fails to deal with key issues that the USA needs to have addressed now, such as that of capital punishment and rendition. Judge Damon Keith stated that 'democracy dies behind closed doors' and it is evident that the American people and government do not uphold or adhere to their constitution when it doesn't suit them. Therefore whether or not it safeguards individual rights or not is irrelevant if it is not always honoured and maintained. ?? ?? ?? ?? By Caoimhe Mc Guinness 14A ...read more.