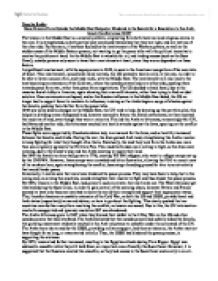 Have Powers From Outside the Middle East Helped or Hindered in the Search for a Resolution to the Arab-Israeli Conflict since 1948?

Deepika Reddy Have Powers From Outside the Middle East Helped or Hindered in the Search for a Resolution to the Arab-Israeli Conflict since 1948? The tension in the Middle East is a constant problem; originating from both historical and religious claims to the area. It is strengthened, as both parties have convinced themselves that they are right, and are victims of the other side. Furthermore, it has been fuelled by the involvement of the Western powers, as well as the stubbornness of the Middle Eastern powers, not wanting to go the peace talks with the political incentive to resolve the problems at hand. As the Middle East is valuable for oil, and trading access (such as the Suez Canal), outside powers only seem to have their own interests at heart; since they are so dependant on these factors. A significant involvement, with the superpowers in 1948, is seen in the American recognition of the new state of Israel. This involvement, would have many motives, the US wanted to have an ally, in the area, in order to be able to have a source of oil, and trade route, with the Middle East. The involvement will also lead to the area becoming an extension of the Cold war, where the outside powers help arm either side, pushing them towards peace from war, rather than peace from negotiations. ...read more.

The Arabs were also armed by the USSR, providing military support, had they not done so, the Arabs may not have fought for as long, or even started initially. Thus, the USSR had hindered the peace process, in supporting the violence. By 1973, tension had further increased, resulting in the Egyptian attacks during Yom Kippur. Egypt was advised to ceasefire while they still held Sinai; an important area of land by the Suez Canal. However, it is suggested that the Russians wanted the ceasefire, so they had access to the Suez Canal and an ally in an oil-rich area. As the Arabs still had oil, it could be used against the US, and so they intervened with self-interest; ordering a ceasefire. The UN were persuaded to support this, however they did so, but not with political will, but force. Thus thrusting them further from peace as both sides would feel resentful. Subsequently; outside powers started to realise that wars do not help in peace processes, but terrorist attacks grew. This caused the outside powers to intervene, again, using political pressure to help. The Oil War was a large factor, as the outside powers were so dependant upon it. However, they still had their own interests in the forefront of their minds. ...read more.

Even if they did, neither side would be able to control their extremist groups, so there always be continuous friction between the two states. Meanwhile ,the US zigzag policy form trying to be an 'honest broker,' left both sides weary of them, and suspicions arose when they seemed to either to be fair or to take a side. The UN refugee camps were of such poor conditions, discontentment grew widely amongst the Palestinians in them, resulting in the rise of terrorism, showing how easily it is to start off violence, even though both sides are seen to have come to a political end. Due to the initial involvement of the outside powers, peace through negotiation I feel is now impossible. The Israelis believe that they can win through fighting, so they do not have the political will, during the peace talks. Similarly with the Arabs, as no one seemed to be consistently backing them, no peace talks were seen to represent them fairly. Also, by trying to stick to the so-called 'Road Map to peace' the outside powers have only arose suspicion from the Arab side, again making it near impossible to create a solution. Peace talks were impossible as they constantly avoided the initial problem of land; until this is done so, and supported by an unbiased power, peace will never be achieved. ...read more.