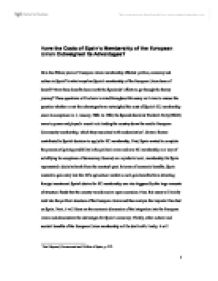 Have the Costs of Spain&amp;#146;s Membership of the European Union Outweighed its Advantages?

Have the Costs of Spain's Membership of the European Union Outweighed its Advantages? How has fifteen years of European Union membership affected politics, economy and culture in Spain? In what ways has Spain's membership of the European Union been of benefit? Have these benefits been worth the Spaniards' efforts to go through the thorny journey? These questions will be born in mind throughout this essay as it aims to answer the question whether or not the advantages have outweighed the costs of Spain's EU membership since its acceptance in 1, January, 1986. In 1982, the Spanish Socialist Worker's Party (PSOE) came to power and played a crucial role leading the country down the road to European Community membership, which they associated with modernization1. Several factors contributed to Spain's decision to apply for EC membership. First, Spain wanted to complete the process of gaining credibility in the political arena and saw EC membership as a way of solidifying its acceptance of democracy. Second, on a symbolic level, membership for Spain represented a decisive break from the country's past. In terms of economic benefits, Spain wanted to gain entry into the EC's agriculture market as well gain benefits from attracting foreign investment. Spain's desire for EC membership was also triggered by the large amounts of structural funds that the country would receive upon accession. First, this essay will briefly look into the political structure of the European Union and then analyze the impacts it has had on Spain. ...read more.

Under pressure by the Western powers, Spain joined NATO in return for membership in the EC. This dual membership gave the Spanish state the opportunity to become a key player in the international political arena. A significant example to a crucial role Spain played in the international politics is during 1990, when the Conference on Security and Cooperation in Europe (CSCE) was held in Palma de Mallorca. Confronted with the issue of immigration from the southern part of the Mediterranean and environmental degradation, Spain achieved to persuade CSCE to identify "economic cooperation as central to the protection of the Mediterranean" and to attract attention to the necessity of social and economic development in the region11. However, there are also those who argue that Spain is becoming more and more dependent on others in making its foreign policies. For example, the normalization of diplomatic relations with Israel and Albania in 1986 was when Spain had to align its diplomatic relations with the other EC members'. Yet, this should not be considered as being dependent on others because Spain chooses to do so to benefit from it in return. The next part of the essay will analyse the economic impacts of the EU membership on Spain and will show that there have been very significant improvements in its economy after its accession in 1986. Furthermore, these economic benefits have often resulted in positive political outcomes for Spain; for example, with more economic powers, Spain has gained a prestige and become a first world country. ...read more.