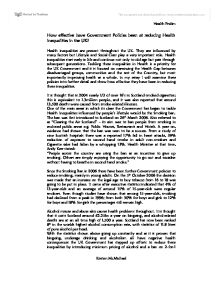 How effective have Government Policies been at reducing Health inequalities in the UK? Health inequalities are present throughout the UK. They are influenced by many factors but Lifestyle and Social Class play a very important role. Health inequalities start early in life and continue not only to old age but pass through subsequent generations. Tackling these inequalities in Health is a priority for the UK Government and it is focused on narrowing the Health Gap between disadvantaged groups, communities and the rest of the Country, but most importantly improving health as a whole. In my essay I will examine these policies into further detail and show how effective they have been in reducing these inequalities. It is thought that in 2004 nearly 1/3 of over 16's in Scotland smoked cigarettes; this is equivalent to 1.3million people, and it was also reported that around 13,500 deaths were caused from smoke-related illnesses. ...read more.

On the 5th October 2006 the decision was made that an increase on the legal age to buy tobacco from 16 to 18 was going to be put in place. It came after executive statistics indicated that 4% of 13-year-olds and an average of around 15% of 15-year-olds were regular smokers. Even though studies have shown that among 15-year-olds, smoking had declined from a peak in 1996; from both 30% for boys and girls to 12% for boys and 18% for girls the percentages still remain high. Alcohol misuse and abuse also causes health problems throughout. It is thought that it costs Scotland around �2.25bn a year on bingeing, and alcohol-related deaths are at an all time high of 1,500 a year. Scotland has now been ranked 8th in the worlds highest alcohol consumption rate, with statistics of 11.8 litres of pure alcohol per head. With the statistics shown above going up constantly and as it is proven that bingeing, underage drinking and alcoholism all have negative health consequences the UK ...read more.

Those of Social Classes D and E - the poorest of the social groups - are far more likely to be heavy smokers due to the fact they are part of the cycle of deprivation; poverty, poor housing conditions, lack of resources in health and education, and the issue that they are living in an environment where there are a number of risk factors surrounding smoking in which nicotine addiction comes in, but no changes have been put in place because this is seen to be the 'norm' for people of lower social status. Taking all of my points into consideration, I have came to the conclusion that Yes! Government policies have been effective in reducing Health Inequalities in some areas e.g. lifestyle, but as long as there is such a wide gap in Social Class the Health Gap will remain very large and the improvements wanted by the Government won't be met until action is taken to lessen these differences. ?? ?? ?? ?? Health-Prelim Kirsten McMichael ...read more.

3 Stars - The basic structure and use of supporting evidence is broadly effective in this essay. A logical and well argued conclusion is reached, but not all points were consistently linked to the core question of the effectiveness of policies. in places the style was too informal as well.