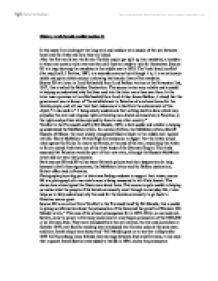 History-Arab/Israeli conflict section B In this essay I am looking at the long-term and medium term causes of the war between Israel and the Arabs and how they are linked. After the first world war the former Turkish empire got split up into mandates, a mandate is when one country rules over another until they are ready to rule for themselves. Source B1 is a map showing the mandates in the middle east in 1923. The 'Arab Israeli conflict' (the map) by S.J. Perkins, 1987, is a secondary source but although it is, it is an extremely useful and quite reliable source in showing the boarder lines of the mandates. Source B2 is a letter to Lord Rothschild from Lord Balfour written on the November 2nd, 1917, this is called the Balfour Declaration. This source is also very reliable and is useful in helping us understand why the Jews read into the letter more than was there. ...read more.

In return the British, at the end of the war, would help the Arabs to form a united Arab state out of the Arab lands of the Ottoman Empire. The Arabs assumed that Palestine would be part of their new state, although the Hussein-McMahon letters did not state that precisely. Both sources B2 and B3 tell us about Britain's policies and their desperation for help, because in both these agreements, the McMahon letters and the Balfour declaration, Britain offers land in Palestine. Photographs play a big part in historians finding evidence to support their views, source B6 is a photograph of a man who's nose is being measured to tell if he's Jewish. This shows how stereotypical the Nazis were about Jews. This source is quite useful in helping us realise what the people of the Jewish community went through in everyday life, it also helps us to fully understand why the need for the Jewish community to go back to Palestine was so great. ...read more.

Later "a campaign of hate and vilification accompanied by the growing legal discrimination against the Jews who, Hitler made clear, the intended to force out of Germany until it was 'Jew-free'." this extract re-enforces the picture in source B6. Source B4i is a chart showing the number of Jewish people who migrated into Palestine in 1882 to 1947. In the years of Hitler's reign and the 1933 persecution, numbers migrating to Palestine grew from 84,000 Jews in 1924-1931 to 215,000 Jews from between 1932 and 1938. Source B4ii is a table showing the proportion of Jews in Palestine to the total population of Palestine. In 1918 the total number of Jews was only 9% but by 1947 the total number grew to 32% a staggering 23% more, that's a large increase for 30 years. This source is useful in helping us understand why immigration grew (at the reign of Hitler) and why the Arab population hated it so much. ...read more.