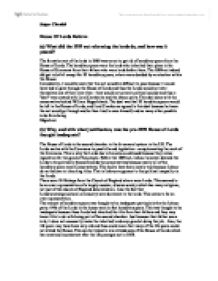 House Of Lords Reform - What did the 1999 act reforming the lords do, and how was it passed?

House Of Lords Reform (a) What did the 1999 act reforming the lords do, and how was it passed? The formation act of the lords in 1999 was an act to get rid of hereditary peers from the House of Lords. The hereditary peers were the lords who inherited their place in the House of Commons from their fathers who were lords before them. The 1999 act indeed did get rid of all except for 92 hereditary peers, whom were decided by an election within the House. Immediately, it could be seen that this act would be difficult to pass because it would have had to gone through the House of Lords and thus the Lords would not vote themselves out of their own titles - they would not commit political suicide and thus a "deal" was created with Lord Cramborne and the labour party. This deal done with the conservative behind William Hague's back. The deal was that 92 hereditary peers would be left in the House of Lords, and Lord Cramborne agreed to this deal because he knew the act would go through and he then tried to save himself, and as many other possible lords from being Edged out. (b) Why, and with what justification, was the pre-1999 House of Lords thought inadequate? The House of Lords is the second chamber in the bi-cameral system in the UK. The Lords works with the Commons to pass bills and legislation - complementing the work of the Commons. ...read more.

This could get rid of the idea of Lords being biased because they don't have to be. Their choice does not make them commit political suicide. There could also be the argument of inadequacy with the clashes between the govt and the Lords. There have been clashes over issues such as fox hunting where the lords rejected the ban, the infamous section 28 were the lords rejected the repeal of section 28, and the privatisation of air traffic control 2000. These clashes imply that the lords are just not willing to come to conclusions with the government, and thus could be seen as not complementing the work of the parliament, but contradicting it. (c) How satisfactory were the recommendations of the Wakeham commission for stage 2 of the Lords reform? First of all, I will have to discuss what the Wakeham Proposals actually were and discuss the advantages and disadvantages of them. The proposals detail quotas for religious lords and judicial lords, partially elected lords and how the elections for the partially elected lords would occur. Partially elected lords in theory would make the Lords partly legitimate and represented for the people, but it would not be legitimate enough to challenge the supremacy of the lords. But the question is, will a partially elected lords be legitimate, or partially legitimate? There would be elected lords and appointed lords and problems could arise in the idea that some of the Lords would be legitimate and others wouldn't. ...read more.

The Political parties however have different views of reformations. The Conservatives want an upper house of 300, in which 240 (80%) would be elected and the other 20% would be appointed. The Conservatives think that the elected lords would be elected by First Past The Post by 80 county constituencies to serve for 3 poling sessions. The independent appointments commissions should appoint the 20 % lords. The Judges and the bishops would be retained but the Lords would have no extra powers. The Lib Dems believe that a senate of 100 should be the upper house which would all be elected by the PR system. The lords would be elected for 6 year periods. They think that the lords delaying power should be changed from 1 year to 2 years. Labour's Lord Irvine created the govt. white paper. This was their views for the lords. There should be a chamber of 600 where 20% is elected, 20 % would be cross benchers, a max of 55% would be appointed by powers to reflect the results of the general election. The Bishops and the judges should be retained. Many Labour members thought that the white paper was unfair- there needs to be more elected- around 40-50%. The Got. Then agreed to set up a joint select committee of lords and commons to suggest proposals for lord's reform. The MP's would then get a free vote. The conservatives, I think, have only created their view of the reform of the lords to point score over labour. Because there is little point in having an 80% elected secondary house which is legitimate without giving them any extra powers- there is little point. Jasper Chandel ...read more.