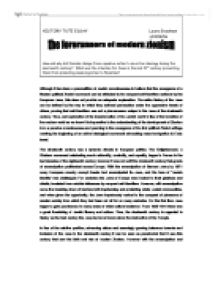 How and why did Zionism change from a passive notion to an active ideology during the nineteenth century? What was the situation for the Jews in the mid 19th century preventing them from premoting mass migration from Palestine?

Although it has been a precondition of Jewish consciousness to believe that the emergence of a Modern political Zionist movement can be attributed to the rampant anti-Semitism suffered by the European Jews, this does not provide an adequate explanation. The entire history of the Jews can be defined by the way in which they suffered persecution under the oppressive hands of others, proving that anti-Semitism was not a phenomenon unique to the Jews of the nineteenth century. Thus, and exploration of the transformation of the Jewish world in lieu of the invention of the modern world as we know it is imperative to the understanding of the development of Zionism from a passive consciousness and yearning to the emergence of the first political Zionist writings marking the beginning of an active ideological movement advocating mass immigration to Eretz Israel. The nineteenth century was a dynamic climate in European politics. The Enlightenment, a Western movement celebrating man's rationality, centrality, and equality, began in France in the last decades of the eighteenth century; however it was not until the nineteenth century that grants of emancipation proliferated across Europe. With the emancipation of German Jewry by 1871 every European country except Russia had emancipated its Jews, and the face of "Jewish identity" was challenged. ...read more.

In the 1840's both men endeavored to spread their beliefs and enlist support from the Jewish groups and leading Jewish personalities of the time. In 1836, Rabbi Kalischer appealed to Anschel Rothschild to purchase the Land of Israel, or at the very least the Temple Mount. In 1843, Rabbi Alkalai published Minchat Yehuda (Yehuda's offering) in which he elaborates on the need for human initiatives, which will hurry the coming of the redemption. Alkalai called for the introduction of the tithe for financing settlement, for the achievement of international recognition of Jewish Eretz Israel, for the restoration of the assembly of elders as a Jewish parliament, for the revival of Hebrew (particularly spoken Hebrew), for Jewish agriculture, and for a Jewish army. Despite their considerable efforts including the suggestion of practical programs, their influence was limited. Alkali and Kalischer's notions based on "religious redemption", did not appeal to the Jews who were embedded in the assimilation process of western Europe. Nor did they gain support from their orthodox religious followers, many of whom believed the political nature of their plight to be a potentially "dangerous aberration from the true faith"2 during a time which shook Jewish identity at its core. ...read more.

have become estranged."11 Many feared tainting these new values and preventing further assimilation into secular European society by acknowledging the "pessimism" underpinning Zionist sentiment. The efforts of the first political zionist thinkers in the raising of funds, awareness and support were rigorous and revolutionary. As a result of their writing, advocacy, practical plans and their pleas to Jewish philanthropists such as the Montefiores and the Rothschilds to sponsor agricultural settlements, a small group of immigrants from Russia migrated to Eretz Israel in 1882. This has become known in Zionist history as the First Aliyah. Furthermore, their effors led to the establishment of a Committee meeting at Odessa (1883) for the colonization of Palestine, where representatives of all European Jewries met and discussed plans of colonization in Palestine, thus laying the foundation for the Zionist movement- Hibbat Zion. Nevertheless, because of restrictions emplaced on immigration to Palestine by the Ottoman authorities, lack of funding and the complex and conflicting predicaments imposed on Jews during the nineteenth century, the work of these earlier thinkers was never fully realized. However, the various political and religious affiliations and inspiration on "forerunners of Zionism" 12 can be found permeating through the later writing of Theodore Hertzl proving in fact that the notion had been building for decades and that these thinkers were a significant and fundamental role in the formation of the ideology. ...read more.