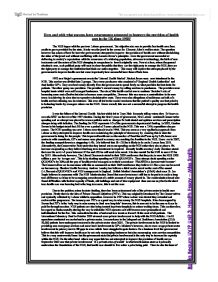 How, and with what success, have governments attempted to improve the provision of health care in the UK since 1992?

How, and with what success, have governments attempted to improve the provision of health care in the UK since 1992? The NHS began with the post war Labour government. The objective aim was to provide free health care from cradle to grave provided by the state. It truly was the jewel in the crown for Clement Atlee's welfare state. The question however has arisen of how far have the governments attempted to improve the provision of health care without diminishing the shine of the jewel and without conflicting with Aneurin Bevan's principles. Have the government succeeded at delivering to society's expectations with the occurrence of a widening population, advances in technology, the birth of new treatments and the nature of the NHS changing in comparison to how it originally was. Now at a time, where the general election is near, each political party will want to show the public that they are the right party to manage the NHS, they are the right party to manage the institution that binds our nation together. This essay will explore the attempts placed by the government to improve health care but more importantly how successful have these efforts been. 1992 saw Major's government create the 'Internal Health Market'. Market forces were now introduced in the NHS. This service was divided into 2 groups. They were purchasers who consisted of 'Regional Health Authorities' and fund holder GP's. They received money directly from the government to spend freely on what provides the best deals for patients. The other group was providers. The provider's earned money by selling services to purchasers. The providers were hospital trusts which were self managed businesses. The aim of this health market was to continue Thatcher's aim of becoming more cost effective but also to become more competitive. However this was seen as a contradiction in its own terms in achieving its aims due to expensive administrative costs. There were also allegations of unfairness and talk of a health service rationing was in existence. ...read more.

These targets focused, in large part, on speeding up access to care. For instance, people arriving at A&E departments were supposed to be seen within four hours, and GPs were told to offer an appointment within 48 hours of a request. 2005 saw the star ratings to be replaced by a five-level worded grading system. This has been seen as an improvement to the health provision as more emphasis is placed on patients' experiences and is not as crude and simplistic to the NHS as was the star ratings. Both the BMA and Parents Association welcomed this improvement as they believe that the health system to the patients need is now a better system that uses fewer targets and gives patients more useful information. However the targets have faced rigorous criticism as it forces doctors to concentrate on meeting targets rather than treating patients according to their needs. In order to meet waiting list targets more straightforward cases have been prioritised at the expense of more complex cases. A primary example of this would be Staffordshire Hospital where 400 more deaths occurred between 2005- 2008. This was due to target pressure and the hospital being so distressed in achieving their targets to be a foundation and to be more efficient that the patients care was not taken at face value. This has been seen as ironic as in 2007 the hospital was classes as 'good' during inspection highlighting that targets have not been an improvement rather they have been a disincentive to quality of care and an incentive to quantity. The targets can be seen as a success and an improvement to the NHS as 2010 mortality ratings were achieved. Existing outcome targets in areas such as cancer and coronary heart disease will run until 2010. Before the introduction of the targets in 2002 23% of patients would spend 4 hours or more waiting for treatment. In 2004, after introduction of the targets only 5.4% of patients spent 4 hours or more in A&E. ...read more.

It can be said that better choice and quality of care and efficiency is central to the Government's agenda for modernising and improving and creating a patient centred NHS as Brown said in the 2009 conference 'It is now more than ever important to create a patient centred NHS'. All 3 main political parties are in consensus for this hence differences between these parties are now more than ever blurred. As Brown stated in the 2009 annual conference, ' For us the NHS has not been a 60-year mistake but a 60-year liberation.' The NHS is committed to improving access to services and increasing the choice patients can exercise when they use these services. However, as our government does not wish to do itself down it will never admit to its failings in the system such as staff shortages, lack of equipment, deductions in funding and old buildings which highlights the overall extent to whether these improvements can be concluded as a success. In the current economic climate the government is concerned in improving the health provision but also maintaining that it is run cost effectively in the long run. As all in all it can be said that funding is the underlying problem which shadows itself over the success of the health provision. The money in the NHS is not enough to provide for the aging societies expectations therefore asks whether we can have a patient centred NHS. We have two generations of people who take their health for granted in that they feel in all occurrences it is the NHS's responsibility to provide treatment for free to the detriment of the older generation who placed the NHS on its feet and now need the services and cannot get them. At the time of the general election drawing near, it is time that the Government did what it so often promised and so often fails to do, and really put the patient first. This is the only way society will see an improvement in the health provision. ?? ?? ?? ?? Rabia Begum UVI9 Unit 3: Health Essay - Miss Smith 1 ...read more.