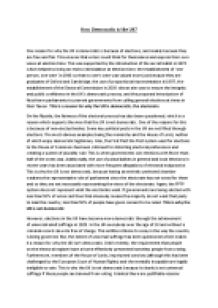 How Democratic is the UK?

﻿How Democratic is the UK? One reason for why the UK is democratic is because of elections, and mainly because they are free and fair. This ensures that voters could think for themselves and express their own views at election time. This was supported by the introduction of the secret ballot in 1872 which helped to bring an end to intimidation at election time, the establishment of ?one person, one vote? in 1948 so that no one?s vote was valued more just because they are graduates of Oxford and Cambridge, the use of proportional representation in 1997, the establishment of the Electoral Commission in 2000 whose aim was to ensure the integrity and public confidence in the UK?s democratic process, and the proposed introduction of fixed-term parliaments to prevent governments from calling general elections at times in their favour. This is a reason for why the UK is democratic, the electorate. On the flipside, the fairness of the electoral process has also been questioned, which is a reason which supports the view that the UK is not democratic. ...read more.

This is why the UK is not democratic However, elections in the UK have become more democratic through the achievement of universal adult suffrage in 1928. In the UK everybody over the age of 18 and without a criminal record can vote free of charge. This entitles citizens to a say in the way the country is being governed. But, the extent of universal suffrage has been questioned which makes it a reason for why the UK isn?t democratic. Until recently, the requirement that people on the electoral register have a home effectively prevented homeless people from voting. Furthermore, members of the House of Lords, imprisoned convicts (although this has been challenged by the European Court of Human Rights) and the mentally incapable are legally ineligible to vote. This is why the UK is not democratic because it clearly is not universal suffrage if these people are banned from voting. Granted there are justifiable reasons for this (why should convicts be given a vote if they cannot even abide by the law?), but they still do not get a say in how the country is governed. ...read more.

And also strangely enough, the supporters of the Liberal Democrats and Labour also have similar views. An example of this would be that in a survey conducted online, 42% of Lib Dems and 40% of Labour agreed with the statement that ?The economy as a whole would benefit if government intervened more in British companies by playing a more active role in encouraging and supporting the best businesses?. This is still a bad thing because The UK is also democratic due to Parliament. Since parliament is the only popularly elected body in the UK government, parliament lies at the heart of the democratic process. Parliament is the main body that links government to the people, and it does this by upholding representative and responsible government. It also ensures a representative government due to the fact that the House of Commons is elected; the electorate are electing somebody to represent them. MPs are meant to represent their constituencies and the House of Commons serve this as it is the debating chamber. Moreover, parliament ensures responsible government in that it overseas and scrutinises the actions of government, and the 2 chambers do this. ...read more.