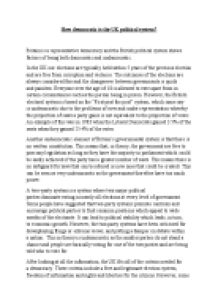 How democratic is the UK political system?

﻿How democratic is the UK political system? Britain is a representative democracy and the British political system shows factors of being both democratic and undemocratic. In the UK our elections are typically held within 5 years of the previous election and are free from corruption and violence. The outcomes of the elections are always considered fair and the changeover between governments is quick and painless. Everyone over the age of 18 is allowed to vote apart from in certain circumstances such as the person being in prison. ...read more.

Another undemocratic element of Britain?s governmental system is that there is no written constitution. This means that, in theory, the government are free to pass any legislation as long as they have the majority in parliament which could be easily achieved if the party has a greater number of seats. This means there is no safeguard for laws that can be altered or new ones that could be created. This can be seen as very undemocratic as the government therefore have too much power. ...read more.

This in theory is undemocratic as the smaller parties do not stand a chance and people are basically voting for one of the two parties and are being told who to vote for. After looking at all the information, the UK fits all of the criteria needed for a democracy. These criteria include a free and legitimate election system, freedom of information and rights and liberties for the citizens. However, some of the criteria are not completely fulfilled, such as the fair election system as it can be seen as undemocratic. Therefore the UK is mainly democratic but could be improved on some issues such as the election system and a written constitution to guarantee certain laws fundamentally. ...read more.