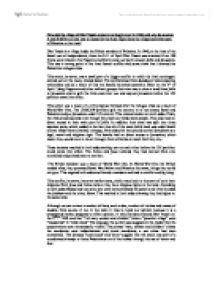 How did the village of Dier Yassin come to be fought over in 1948, and why do sources A and B differ on who was to blame for the Arab flight from the village and other pars of Palestine at the time?

How did the village of Dier Yassin come to be fought over in 1948, and why do sources A and B differ on who was to blame for the Arab flight from the village and other pars of Palestine at the time? Dier Yassin is a village inside the British mandate of Palestine. In 1948, at the time of the Israeli war of independence, from the 9-11 of April Dier Yassin was attacked. Over 100 Arabs were killed on the Haganna and Stern Gang war path between Jaffa and Jerusalem. This was a turning point in the Arab Israeli conflict and some claim that it started the Palestinian refugee crisis. This attack, however, was a small part of a bigger conflict in which the Arab contingent started war on the newly created Israel. The conflictarose from decades of old competing nationalists and as a result of this the Israelis launched operation Dalet on the 4th of April. Using Haganna and other militant groups their aim was to clear a road from Jaffa to Jerusalem and to split the Arab state into two and capture Jerusalem before the UN partition came into effect. This action was a result of a UN proposal formed after the refugee crisis as a result of World War One. The UNSCOP partition split the country in to two states: Israel and Palestine and put Jerusalem under UN control. This created tension on both sides. Firstly the Arabs had less land even though they had two thirds more people. ...read more.

The speaker, Mrs Golda Meir [Israel's foreign minister] is trying to shift the blame to the Arabs. The source says that the Jews were not responsible: The "responsibility", the speaker claims, "must lie" with the Arab leaders who told their people to leave so they could attack. She also says that the refugee crisis is not the result of an isolated case as refugees are a normal consequence of war. She firmly puts the blame on the Arab armies who she claims "invaded" the state of Israel. She is careful to talk about "hundreds of thousands of Palestinian Arabs" who were the victims of these invasions. Obviously she does not accept that Israel did anything illegal to cause the refugee problem. In her statement she makes it clear that she does not accept that the attack was a terror attack sanctioned by the Israeli leaders, as stated in Source A. The attack, she claims, was not part of an Israeli plan to force people out of the home but was a random attack by non-authorized militant "Jewish dissidents". The language the speaker uses is superficially less decorative and emotional. Infact she seems to be trying to create the impression that she is unbiased, using phrases like "historically incorrect" and attempts to reduce the horror of the event by words such as "incident". Any emotional language is saved to describe the Arab armies who carried out "aggression against Israel. This author might be trying to shift the blame for the refugee problem because who ever caused the problem would have to fix it by looking after the refugees, feed, cloth and house them, which would stretch already stretched resources. ...read more.

They claim that the attack was organised by Jewish dissidents and was not sanctioned by the Israeli government in any way shape or form. Again they try to shift the blame by claiming the Arabs started the war and refugee crisis. They claim that the Arabs started a civil war that initiated the refugee crisis. Then increasing it by telling the Arabs to leave so they could attack Jewish settlements. This lead to a major refugee crisis and one of the main reasons for the conflict in the Middle East. Another point the made is that refugees are a normal consequence of war and this is not a special case Both sources are partisan sources. They are one sided and are both trying to create opinion. The fact is they are both different interpretations from different sides about the same event and have to be corroborated to be useful. However we can extract facts from the heavily decorated and partisan wording to cross reference with other sources. Both also have issues of reliability. Source A: Partisan language leads to heavily loaded source, its wrote by Arabs and clearly is trying to create opinion, its part of a propaganda leaflet, its secondary so has had more time for a myth to be created and its designed to shift blame to the Israelis. Source B: Is also secondary and is a speech designed to shift blame to the Arabs for the refugee crisis. Moreover we need to corroborate these sources to find an accurate picture of what happened. We can't judge such a big thing with to Partisan sources. ...read more.