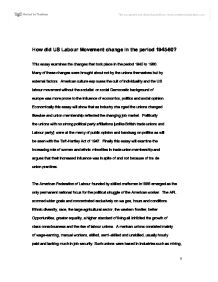 How did US Labour Movement change in the period 1945-60? This essay examines the changes that took place in the period 1945 to 1960. Many of these changes were brought about not by the unions themselves but by external factors. American culture espouses the cult of individuality and the US labour movement without the socialist or social Democratic background of europe was more prone to the influence of economics, politics and social opinion. Economically this essay will show that as industry changed the unions changed likewise and union membership reflected the changing job market. Politically the unions with no strong political party affiliations [unlike British trade unions and Labour party] were at the mercy of public opinion and bandwagon politics as will be seen with the Taft-Hartley Act of 1947. Finally this essay will examine the increasing role of women and ethnic minorities in trade union membership and argues that their increased influence was in spite of and not because of trade union practices. The American Federation of Labour founded by skilled craftsmen in1886 emerged as the only permanent national focus for the political struggle of the American worker. The AFL scorned wider goals and concentrated exclusively on wages, hours and conditions. Ethnic diversity, race, the large agricultural sector, the western frontier, better Opportunities, greater equality, a higher standard of living all inhibited the growth of class consciousness and the rise of labour unions. ...read more.

By the 1950s what mattered the most in labour relations was not government law such as Taft-Hartey but the relative power of unions and management in the economic marketplace. Where unions were traditionally strong their influence was maintained. Weaker unions suffered because of the new legislation and were unable to grow. The Act reaffirmed labour's basic right to bargain collectively. [Patterson, 1996, pp50-52] American unions were losing the support of a whole generation including support among blacks and women. Unions had offered an attractive career to the young in the years between 1935 and 1960 but this was no longer true. A great majority of unions were unorganised. Demographic, economic, social and technological change from the mid 1960s rapidly transformed the nature of the labour force. Automation reduced the need for workers in basic industries, for example, car companies. Walter Reuther saw the need for action by the AFL-CIO and he argued that labour must help the poor by creating community unions and launching aggressive organising campaigns. He wanted the United Autoworkers [UAW] to fight for more democracy in the labour movement. The UAW, the most democratic, cleanest union which had always backed the Democratic Party emerged as the most autocratic, corrupt and successful exponent of business unionism which had always supported the Republicans. ...read more.

This was the case not only in its failure to bring the black working class Into union membership but also it lack of vision in ignoring the increasingly important place of women in the workforce. The increasing role of women in the workforce was due not to women inspiration but due to external political and economic conditions, for example, a shortage of manpower brought about in the Second world war. World war two complicated women's workplace culture. Hundred of thousands of women entered into auto work for the first time during the war often performing jobs considered ''men's work''. This increased the frequency and hightened the tensions of male and female interaction. Higher wages and increased numbers strengthened women's shop floor power. They often used that power to assert control of working conditions. As they took up new positions women auto workers became more willing to challenge gender discrimination. ' Working through both formal and informal union networks, women demanded equal pay for equal work and equal access to defence work.'2 It is important therefore to recognise the importance of the Taft-Hartley Act of 1947, how it successfully placed major obstacles in the way of union organisation resulting in the weaker unions suffering in growth. 1 Myers, D interview by Zahavi, Nov 11, 1992, audiotape, side 1, tape 1 2 Gabin, Feminism In the Labour Movement, 47-100 ?? ?? ?? ?? 32 1 ...read more.