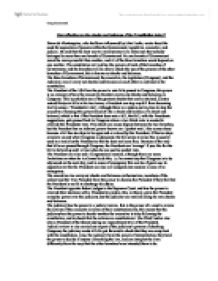 How effective are the checks and balances of the Constitution today?

How effective are the checks and balances of the Constitution today? Baron de Montesquieu, who had been influenced by John Locke, wrote about the need for separation of powers within the Government; legislative, executive, and judicial. He said that the best way to avoid tyranny is to make sure that nobody belonged to more than one branch of Government. No one branch of Government would be more powerful than another, and all of the three branches would depend on one another. The constitution will outline the powers of each of the branches of Government, and the branches will be able to check the use of the powers of the other branches of Government, this is known as checks and balances. The three branches of Government; the executive, the legislature (Congress), and the Judiciary, can all carry out checks and balances on each other as outlined in the constitution. The President of the USA has the power to veto bills passed in Congress, this power is an example of how the executive chamber carries out checks and balances on Congress. This is probably one of the greatest checks that can be attained, Clinton vetoed thirty-six bills in his two terms, a President can stop any bill from becoming law by using ...read more.

The judiciary has the power to a judicial review, this is the power of a court to review the actions of the executive in terms of their constitutionality, this means that the judiciary has the power to decide weather the executive is truly following the constitution, and to check that the actions are constitutional. The Chief Justice also sits as President of the Senate during an impeachment trial of the President. Judicial review is also carried out as part of the judiciary's powers of checking Congress; the judiciary reads all bills put forward to check that they are compliant with the constitution. Also, the judiciary have the power of interpretation, they hold the power to decide if anyone is breaking the law, and can interpret the laws differently from the way that the other branches have intended them to be. Congress holds many checks and balances on both the executive and the judiciary, and some of these checks and balances are specific to either the Senate or the House of Representatives. Because this branch is bicameral, there are a number of checks and balances within the legislature, Bills have to be passed through both houses of Congress, this is the most obvious and important, but least noticed checks of the legislature, if the houses disagree on a bill, it does not get passed. ...read more.

Congress approve a replacement Vice President should such situation arise, this stops the President from appointing anyone they wish as the Vice President. The President is required to deliver a State of the Union Address to Congress annually; this is where the President delivers a speech to both houses of Congress reporting the status of the country. This speech allows Congress to check the Presidents intentions and to make sure that they are not to drastic. The Senate approves the federal judges selected by the President, this checks the quality of the judges put forward to correct any bad decisions the President may have made. The House of Representatives has the power to impeach any of the federal judges, and the trial is held in the Senate. Congress has the power to initiate constitutional amendments and bills, which could make the constitution/law more specific, narrowing the limits of interpretation for the judiciary. Congress has the power to set courts inferior to the Supreme Court, and in addition to this, it can set the jurisdiction of these courts. The Supreme Court can be altered in size through Congress, allowing them to keep an eye on the judicial interpretations of laws and the constitution. ?? ?? ?? ?? Greg McIlwraith ...read more.