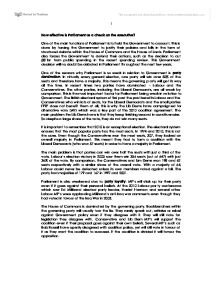 How effective is Parliament as a check on the executive?

How effective is Parliament as a check on the executive? One of the main functions of Parliament is to hold the Government to account. This is done by forcing the Government to justify their policies and bills in the form of structured debate within the House of Commons and the House of Lords. Parliament also forces the Government to defend their actions, such as the decision to cut �81bn from public spending in the recent spending review. This Government decision will no doubt be debated in Parliament throughout the next few years. One of the reasons why Parliament is so weak in relation to Government is party domination. In virtually every general election, one party will win over 50% of the seats and therefore have a majority. This means the governing party will get its way all the time. In recent times two parties have dominated - Labour and the Conservatives. The other parties, including the Liberal Democrats, are all weak by comparison. This is the most important factor for Parliament being weak in relation to Government. The British electoral system of first past the post benefits Labour and the Conservatives who win lots of seats, for the Liberal Democrats and the small parties FPTP does not benefit them at all, this is why the Lib Dems have campaigned for alternative vote (AV) which was a key part of the 2010 coalition agreement. The main problem the Lib Dems have is that they keep finishing second in constituencies. So despite a large share of the vote, they do not win many seats. ...read more.

The issues debated in Parliament are often very complicated and a minister will have it all explained to them, your average MP won't. Government ministers deliberately withhold information as a lot of Government work is highly secretive. As ministers are reluctant to release information which could be politically embarrassing, Parliament has a lack of access to information which should be available for them to get hold of. Obviously there is some limit here - top secret information e.g. threats to national security should remain private, but the Government withholding information purely on the basis that it is damaging to them is wrong. How is Parliament supposed to effectively hold the executive to account if it doesn't know what it is doing? The Government can delay the release of information until nobody is paying attention, and often does. An alternative is to ''sex up'' a document to boost support, e.g. Iraq Dossier. It contained allegations such as the hording of weapons of mass destruction which all proved to be untrue. Parliament is also weakened because MP's have far too many commitments. MP's are very busy people with too many demands on their time. They not only have constituency work to deal with, which has become more important in recent times, but the full Parliamentary week is ever increasing. PMQ's, Ministerial question time, general debates, opposition debates, select committees, there is too much to do and they have no support. Ministers have lots of help, MP's have nothing remotely similar. Parliament is weak in relation to the executive because the electoral system invariably provides the Government with a majority, a hung Parliament (as in 2010) ...read more.

A long standing problem was that the Prime Minister never had to face a select committee, because a select committee is for a department. So the most powerful MP got away because there was no Prime Ministerial department. This was changed under Blair and the Commons Liaison Committee was introduced to hold the Prime Minister to account. The CLC consists of the chairperson of each select committee who cross examine any aspect of policy in depth. Finally, an Early Day Motion can be put forward by a group of MP's. This calls for a debate on a particular subject, so MP's can let the Government know how they feel without actually voting against them. Others are invited to add their support. This has been used by backbenchers to criticise various aspects of Government policy from ID Cards to Iraq. Parliament is weak in relation to the executive because the electoral system invariably provides the Government with a majority. The governing party will usually support the Government on anything even if it goes against their own beliefs. In addition, MP's lack the time, expertise, information and resources needed in order to make life difficult for the Government. However, the Government cannot run without the support of Parliament. Parliament also limits the Governments legislation so it does not always get its own way - Labour wanted ID Cards, but Parliament did not, so they were never implemented. Parliament can also openly scrutinise the executive by questioning ministers, and openly debating policy. Despite some flaws, I believe that Parliament is still an effective body in relation to the executive. Despite the best efforts of the Government to make MP's jobs harder, Parliament can effectively hold the executive to account. ?? ?? ?? ?? 1 ...read more.