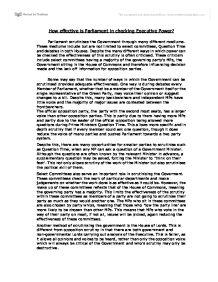 How effective is Parliament in checking Executive Power?

How effective is Parliament in checking Executive Power? Parliament scrutinises the Government through many different mediums. These mediums include but are not limited to select committees, Question Time and debates in both Houses. Despite the many different ways in which power can be checked the effectiveness of this scrutiny is often criticised. These criticism include select committees having a majority of the governing party's MPs, the Government sitting in the House of Commons and therefore influencing decision made and the lack off information for opposition parties. Some may say that the number of ways in which the Government can be scrutinised provides adequate effectiveness. One way is during debates every Member of Parliament, whether that be a member of the Government itself or the single representative of the Green Party, may voice their opinion or suggest changes to a bill. Despite this, many backbenchers and independent MPs have little voice and the majority of major issues are contested between the frontbenchers. ...read more.

These committees check the work of particular departments and make judgements on whether the work done is as effective as it could be. However, the make up of these committees reflects that of the House of Commons, meaning the governing party has a majority. This limits the effectiveness of the scrutiny within these committees as members of a party are not going to scrutinise their party as much as they would another one. The MPs who sit in these committees are also chosen by party whips, meaning that those who 'tow the party line' are more likely to be chosen than other MPs. This means that MPs who vote in the way of their party on most, if not all, issues will be picked, again reducing the effectiveness of these committees. Another method of scrutinising the government is the House of Lords. This is different from opposition scrutiny in that there are both government and non-governmental Lords carrying out analysis of the Executive. ...read more.

This is done through limiting future promotions, replacement of the MP in question in the next election or, in extreme cases, expulsion from the party. When the governing party has a large majority this can often lead to an elective dictatorship. This limits how well opposition MPs can scrutinise the Government as it can effectively pass any new law it wants. The whip system is a large concern as it reduces the freedom of choice for an MP. However, some may argue that people vote primarily for the party and therefore should expect their MP to vote the way of their party. Overall I think that although Parliament is effective in its scrutiny, there is room for improvement. Committees could be more representative of smaller parties, the House of Lords could have more power to amend bills and backbench MPs could be given more opportunities to ask questions of the Government. Despite this, the way in which Parliament scrutinises Government currently is effective, although it is not as effective as it could be. ...read more.