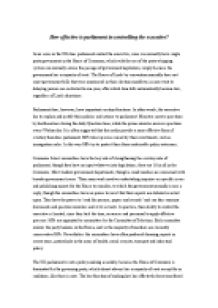 How effective is Parliament in controlling the Executive?

﻿How effective is parliament in controlling the executive? In no sense in the UK does parliament control the executive, since we normally have single party government in the House of Commons, which with the use of the party whipping system can normally ensure the passage of government legislation, simply because the government has a majority of seats. The House of Lords by convention normally does not reject government bills that were announced in their election manifesto; in any event its delaying powers are restricted to one year, after which time bills automatically become law, regardless of Lords objections. Parliament does, however, have important scrutiny functions. In other words, the executive has to explain and justify their policies and actions to parliament. Ministers answer questions by backbenchers during the daily Question time, while the prime minister answers questions every Wednesday. It is often suggested that the media provide a more effective form of scrutiny than does parliament. MPs take up issues raised by their constituents, such as immigration rules. ...read more.

Each committee mirrors the party balance in the House, and so the majority of members are currently conservative MPs. Nevertheless the committees have often produced damning reports in recent years, particularly in the areas of health, social security, transport and industrial policy. The UK parliament is not a policy-making assembly, because the House of Commons is dominated by the governing party, which almost always has a majority of seats except for in coalitions, like there is now. The key function of making law has effectively been transferred to the executive branch, and therefore sees the Commons contribution to the process as one of ?scrutiny and influence?. The powers of the Lords are limited by law and by convention. They can delay legislation only for a year (under the 1949 Parliament Act). The Lords has a key role in the revision of Commons legislation, devoting about 700 hours each year to the task, and offering some 8500 amendments. ...read more.

At the same time there has been a massive growth in the role of government, and an accompanying increase in the size of the bureaucracies which advise governments and which administer policy. Yet over the last 25 years parliament has become more professional, with the disappearance of the ?part-time? MP, the introduction and strengthening of specialist committees, and the increase in support staff. The Commons is more critical of governments, backbenchers rebel more often and the Lords is far more willing to reject Commons legislation. MPs nowadays at the very least expect the Government to listen to them. Backbenchers (through public statements and negotiation behind the scenes) can sometimes force governments to make significant amendments to legislation, though it remains the case that they are usually unable to thwart any major government legislation. Similarly, the Lords can be rebellious, amending or delaying bills, but almost without exception ultimately defers to the Commons, normally after securing concessions. ...read more.