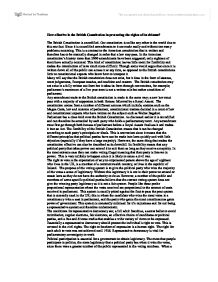 How effective is the British Constitution in protecting the rights of its citizens?

How effective is the British Constitution in protecting the rights of its citizens? The British Constitution is uncodified. Our constitution is unlike any other in the world due to this one fact. Since it is uncodified amendments to it are made easily and without too many problems occurring. This is a contrast to the American constitution that is written and therefore has to be manually changed in order that a law may pass. In the American constitution's history more than 2000 amendments have been suggested; only eighteen of them have actually occurred. This kind of constitution leaves little room for flexibility and makes the introduction of laws much more difficult. Though some would argue that since it is written down all of the public can access it at any time, as opposed to the British constitutions limit to constitutional experts who know how to interpret it. Many will say that the British constitution does not exist, but it does in the form of statutes, court judgements, European treaties, and tradition and custom. The British constitution may not exist in a fully written out form but it takes its form through conventions, for example; parliament's maximum of a five year term is not a written rule but rather a tradition of parliament. ...read more.

It is important to note here that these human rights were added to the British constitution after the UK agreed to the Human Rights Act in 1998 which brought into UK law the European Convention on Human Rights. The over representation o f white middle class males has been put down to a lack of encouragement for minorities to enter politics, a negative stereotype, and a history of white middle class male making any important decisions. However the times are changing and the white middle class male may find it harder to be successful as universities and employing firms don't want to be accused of discrimination. The existence of pressure groups also calls the rights of citizens into question. The Human Rights dictate that every person has the right to peaceful assembly; this means that every pressure group that wants to hold a meeting has the right to do so. For example; Greenpeace can assemble at their local pub for a talk about current issues without anyone holding legal issue with them. However; when protests are held that put the streets at a standstill they are no longer holding a peaceful assembly, it doesn't matter how important their message might be. The pressure group's influence on a political party is often labelled as unfair. ...read more.

The conservatives still hold a pragmatic approach to change when government structure is concerned, for example they didn't fight the abolition of hereditary peers since they knew it was what society needed. The Labour party take their traditional view of replacing the state not amending it. Their concerns lie over minority and civil rights. The 1990s New Labour reforms included. Devolution, a directly elected mayor for London, a new electoral system for devolved assemblies and EU elections, the Human Rights Act, Freedom of Information Act, limits on election campaign spending and a cabinet system for local authorities. The passing of these reforms was pretty easy due to Labour's sizeable majority. Thus far New Labour has failed to strengthen the role of local government and the civil servant. They have also been criticised for an appearance that each reform has been considered in isolation rather than as one overall impact. Ultimately our uncodified unitary constitution outlines the roles of; the constitutional monarchy, parliamentary sovereignty, representative democracy, and the rule of law. Over its lifetime the British constitution has been subject to reform according to party ideals as well as the increasing influence that the EU has since we became as member in 1973. The concept of Parliamentary Sovereignty is increasingly being lost to the greater powers of the European Union and the eminent introduction of a supreme court. Is our unitary state becoming increasingly federal, and what are the risk associated with this kind of change? ...read more.

3 Stars - A very thorough and well written essay. Good subject knowledge is demonstrated across a wide range of points pertinent to the British constitution - where this essay is weak is that these points are not marshalled directly to answer the set question - in fact the question is not referred to and it's key words and commands not integrated into the text. In that respect it is weak, because it veers towards narrative about the key features of the constitution rather than an analysis of how the constitution protects the rights of citizens.