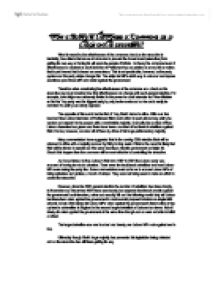 How effective is the House of Commons as a check on the executive?

How effective is the House of Commons as a check on the executive? What is meant by the effectiveness of the commons check on the executive is basically, how able is the house of commons to prevent the Government (executive) from getting its own way or forcing its will upon the people of Britain. In theory the commons level of effectiveness is constant as each Member of Parliament has an opinion on every bill or motion that is put forward that is based on conscience. This is not practicable, however, as the party system and the party whips change this. The whips tell MPs which way to vote and can impose sanctions upon those MPs who rebel against the government. Therefore when considering the effectiveness of the commons as a check on the executive one must consider how that effectiveness can change with each general election. For example, John Major was extremely limited in the power he could exercise as Prime Minister as his the Tory party was the biggest party by only twelve seats and so he could easily be outvoted if a policy was widely opposed. ...read more.

Not all ninety six voted against the government at the same time though and so were not able to inflict a defeat. The largest rebellion saw one hundred and twenty one Labour MPs vote against war in Iraq. Ultimately though Blair's huge majority has prevented his legislation being defeated and so the executive has still been getting its way. The best chance for the government to be defeated was only last week. Charles Clarke's (home secretary) anti-terrorism bill scraped through parliament by a mere fourteen votes. The Liberal Democrats, who hold forty six seats, failed to appear in parliament for this vote and as such passed up the opportunity to veto Labour's legislation and inflict an embarrassing defeat upon Tony Blair in the run up to the election. In the commons the opposition is able to question government policy and raise public awareness about issues. The idea of the opposition party is that it constantly pushes and questions the executive and prevents the government simply doing as it pleases. However, given the recent performance of the Conservative party one could be forgiven for not realising that this was the case. ...read more.

They are designed in this way to be non-confrontational and all members of the committee put aside ideological differences when sitting on one in order to check on the Executive. One of the most well known or prominent such committees is the Departmental Select Committee for Transport, of which the outspoken labour rebel and personal enemy of Tony Blair, Gwyneth Dunwoody is chairwoman. The reports published by such committees are an example of effective checking on the executive as the government must give great consideration to the findings of the committee's reports. In conclusion I think that it is fair to say the effectiveness of the common's check on the executive is variable and dependent on certain conditions. There are times when opposition parties wield far greater power than the Conservatives currently do but there are other measures in place to check on the executive when opposition parties do not do so effectively. Despite the best efforts of party leaders and whips, there will always be those who vote for what they believe in and so ultimately there will always be some sort of check exerted upon the executive by the commons, however weak. 1,134 words. ...read more.