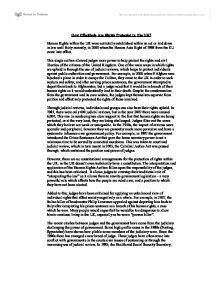 How Effectively Are Rights Protected In The UK?

How Effectively Are Rights Protected In The UK? Human Rights within the UK were not totally established within an act or laid down in law until fairly recently, in 2000 when the Human Acts Right of 1998 from the EU came into effect. This single act has allowed judges more power to help protect the rights and civil liberties of the citizens of the United Kingdom. One of the main ways in which rights are upheld is through the use of judicial reviews, which helps to protect individuals against public authorities and government. For example, in 2000 when 9 Afghan men hijacked a plane in order to escape the Taliban, they came to the UK in order to seek asylum and safety; and after serving prison sentences, the government attempted to deport them back to Afghanistan, but a judge ruled that it would be in breech of their human rights as it would undoubtedly lead to their death. ...read more.

The interpretation and application of the Human Rights Act has fallen upon the responsibility of the judges, and this has been criticised. It allows judges to overstep their traditional role of "interpreting the law" as it allows them to rewrite government legislation - a very powerful role which affects how the people are ruled over, and a position to which they have not been elected. Added to this, judges have been criticised for applying an unbalanced view of individual rights that affect society negatively as a whole. For example, in 2007, the Italian killer of headmaster Philip Lawrence appealed against deporting him back to Italy after completing his prison sentence as a breech of his human rights, a case which he won. Many people would argue that he would be too dangerous to allow him to continue living in the UK, especially as he was a "proven killer". The recent clashes between judges and the government have come from the judiciary challenging the power of government. ...read more.

The sovereignty of Parliament effectively ensures that in the longer term, at least, politicians still have the upper hand. In conclusion, the recent introduction of the Human Rights Act has afforded judges more scope to protect the civil liberties of citizens. The use of judicial review enables protection of individuals particularly against the machinery of government. There has been a significant growth in the use of judicial review in the last twenty years. Judges also have the discretion to refuse to proceed with a trial if they consider that the defendant(s) may be denied natural justice, as in the case of Matrix- Churchill in the early 1990s. Conversely, the social and educational background of judges may influence the way that they deal with individuals from groups with which they cannot empathise (such as union members or protesters). Similarly, there may be cases involving national politics, where the judge appears partial (such as in the trial of Olive Ponting). Judicial decisions have nevertheless become more liberal and less pro-state in recent years. ...read more.