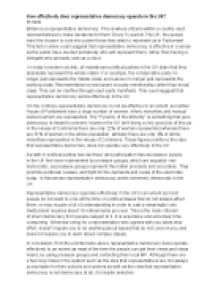 How effectively does representative democracy operate in the UK?

The "Tyranny of the Minority" is something that pure democracy is meant to prevent, however the UK isn?t doing a very good job of this as in the House of Commons there are only 22% of women represented whereas there are 51% of women in the whole population, similarly there are only 4% of ethnic minorities represented in the House of Commons. These figures reinforce the idea that representative democracy does not operate very effectively in the UK. As faith in political parties has declined, and participation has decreased, people in the UK feel more represented by pressure groups; which are arguably very democratic, as pressure groups represent the nation precisely and accurately. ...read more.

This is the main criticism of direct democracy from people subject to it. It is expensive and extremely time consuming. Whereas voting for a representative who agrees with you takes less effort, doesn't require you to do anything about issues that do not concern you and does not require you to learn about complex issues. In conclusion, from the points made above representative democracy does operate effectively to an extent as most of the time the people can get their views and ideas heard, by using pressure groups and contacting their local MP. Although there are a few loop holes in the system such as the idea that representatives are not always accountable for their policies and actions as well as the view that representative democracy is not democracy at all, it is leader selection. ...read more.