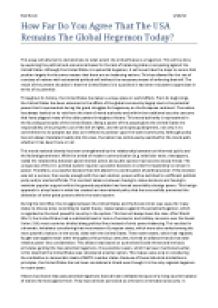 How far do you agree the USA remains a global hegemony today?

﻿Ben Nevin 1/10/12 How Far Do You Agree That The USA Remains The Global Hegemon Today? ________________ This essay will attempt to demonstrate to what extent the United States is a hegemon. This will be done by exploring the political and economical bases for the lack of balancing nations competing against the United States. Although the United States is a potential hegemon, it will never take the steps to secure that position largely for the same reasons that there are no balancing nations. This has allowed for the rise of a society of nations with substantial political will without the necessary means of enforcing that will. The result of the present situation is that the United States is in a position it has been reluctant to appreciate in terms of its potential. Throughout its history, the United States has taken a unique place in world affairs. From its beginnings, the United States has been entwined in the affairs of the global community largely due to the potential power that it represented during the great struggles for hegemony on the European continent. The nation has always looked on its role from the view of moral authority and within the traditional security concerns that have plagued many of the older powers throughout history. ...read more.

This status has been a factor in affairs in the "new world" since near the beginning of American history. The definition by Mearsheimer, is not complete though, because in order for it to work you must look at military influence as the leading motivational factor attributed to domination by a foreign power over another one. Mearsheimer claims that economic factors are only one way of looking at the capability of the military to grow in size and technology. Economic factors have always been a key part of all international affairs since at least the American Industrial Revolution. An example of this is the Washington treaty that triggered the formation of NATO. In terms of this paper, a more liberal view of hegemony is accepted, whereby it can be defined as having three attributes: 1) The capability to enforce the rules of the system. 2) The will to do so. 3) The commitment to an ideology which is perceived as beneficial to the major states. This capability rests along four premises: 1) A large and growing economy. 2) Dominance in a leading technological or economic sector. 3) Political power backed up by projective military power. ...read more.

This is somewhat misleading considering the defence budget in terms of GDP is on par, relatively speaking, with much of the industrialized world. In addition to that, by 2007, the US accounted for 46% of the world?s military spending, and had a nine fold lead over China (the second largest military spenders). The US also has 700 military bases in over 100 countries. Although the USA?s soft power has declined in a number of aspects. Its reputation has been damaged by its association with corporate power and widening global inequality. Moreover, the USA?s moral has been damaged by the ?War on Terror? and the issues in the Guantanamo detention camp. Population The US population is expected to be 439 million by 2050, with more Hispanics and Asians settling, with a relatively low age profile attempting to be sustained. This could lead to improvements in the already skilled areas such as science and technology. In conclusion, I feel that the US is the most suited global hegemon today, as it is leading in near enough all aspects in which are needed to be a global hegemon (e.g. Military, Population and Economic). Although with the recent global crisis affecting the US substantially, countries such as China, India, Russia & Brazil all developing rapidly, the USA?s position is under threat. ...read more.