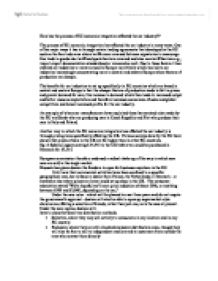 How has the process of EU economic integration affected the car industry??

How has the process of EU economic integration affected the car industry?? The process of EU economic integration has affected the car industry in many ways. One of the major ways it has is through certain trading agreements that developed in the EU such as the free trade area where tariffs were removed between signatories to encourage free trade in goods also tariff and quota barriers removed and also non-tariff barriers e.g., import export documentation standardised or removed as well. Due to these factors it has enabled car industries to move around in Europe more freely which has led to car industries increasingly concentrating more in central and eastern Europe where factors of production are cheaper. ...read more.

Another way in which the EU economic integration has affected the car industry is through pricing laws specifically affecting the UK. Various surveys done by the EU have shown that prices of cars in the UK are far higher than in other EU countries. Eg: A Subaru Legacy costing �14,342 in the UK before tax could be purchased in Denmark for �7,115. European commission therefore endorsed a radical shake-up of the way in which new cars are sold in the single market. Brussels has given dealers the freedom to open for business anywhere in the EU. Until now their commercial activities have been confined to a specific geographical area, but in future a dealer from France, the Netherlands or Denmark - or anywhere else where prices are lower could set up shop in the UK. ...read more.

Under the new regime, dealers will: have to chose between two distribution methods: * Selective, where they may sell actively to consumers in any location and in any EU country. * Exclusive, where they are still allocated exclusive distribution areas, though they will also be free to sell to independent resellers and to customers from outside the area who contact them directly They will also be allowed to exhibit cars of different brands in the same showroom but in separate sales areas. HOWEVER THE CAR INDUSTRIES IN MANY EUROPEAN COUNTRIES HAVE BEEN AGAINST THIS BECAUSE: The car industry is worried that supermarkets will push small car dealers out of the market, dilute car brand integrity. ...read more.