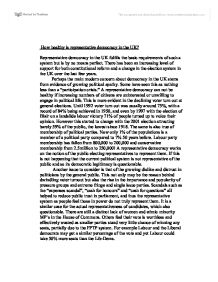 How healthy is the UK democracy

How healthy is representative democracy in the UK? Representative democracy in the UK fulfils the basic requirements of such a system but is by no means perfect. There has been an increasing level of support for both constitutional reform and a change in the election system in the UK over the last few years. Perhaps the main modern concern about democracy in the UK stems from evidence of growing political apathy. Some have seen this as nothing less than a "participation crisis." A representative democracy can not be healthy if increasing numbers of citizens are uninterested or unwilling to engage in political life. This is more evident in the declining voter turn out at general elections. Until 1992 voter turn out was usually around 75%, with a record of 84% being achieved in 1950, and even by 1997 with the election of Blair on a landslide labour victory 71% of people turned up to voice their opinion. ...read more.

This not only may be the reason behind dwindling voter turnout but also the rise in the importance and popularity of pressure groups and extreme fringe and single issue parties. Scandals such as the "expenses scandal", "cash for honours" and "cash for questions" all helped to reduce public trust in parliament, and thus the representative system as people feel those in power do not truly represent them. It is a similar case for the actual representativeness of candidates, which also questionable. There are still a distinct lack of women and ethnic minority MP's in the House of Commons. Others feel their vote is worthless and effectively wasted as smaller parties stand very little chance of winning any seats, partially due to the FPTP system. ...read more.

government, and an increasingly multi party system especially after the surge in support of the Liberal Democrats after the televised Leaders debates in the build up to the 2010 general election. Also voter turnout rose in 2005 to 61% and is on track to rise again in the 2010 election. The number of Women and ethnic minority MP's is also increasing, as was evident with "Blaires Babes" and "Camerons A-team". The introduction of the TV leader's debates in April 2010 was also a step in the right direction for representative democracy in the UK as the public reacted well to the Leaders of the 3 main parties having to answer questions directly from then. In essence representative democracy in the UK, while having its problems is still overwhelmingly legitimate and by the looks of things is set to improve over the years. ...read more.

3 stars - This essay identifies the key issues that contribute towards answering this question, it is logically argued and considers more than one perspective. The points are largely accurate and clearly explained, logical and relevant examples are used.
In identified areas the comments were somewhat generalised and needed to be further explained and supported in order to demonstrate greater insight. In terms of structure and balance, greater weight could have been given to the counter argument, or it could have been integrated into the main body of the essay. There were several errors which indicate more thorough proof reading was required.