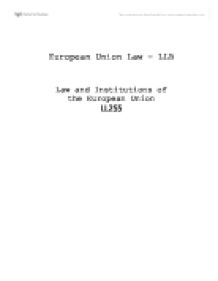 European Union Law - LLB Law and Institutions of the European Union LL255 "[D]erogation ... a temporary waiver from a regulation or ... directive."1 Introduction This essay will look at how Member States can derogate from the trading conditions governed by European Community (EC) rules, starting with a brief account of those rules. The derogations available under Treaty will then be detailed, followed by derogations developed by Community law. The issue of proportionality is a key element for most, if not all, derogations. I will look at how this issue can affect the judgments arrived at by the European Court of Justice (ECJ). I will conclude by looking at issues that seem to require further attention by all parties involved in issues of derogating from EC trading rules, for instance clarity of terminology. ************************************************** European Community Treaty * Prohibitions A fundamental aspect of the European Union concerns trading conditions between Member States, for which the EC Treaty2 expects the structure to be that of a customs union.3 Article 23(1) (ex Art. 9(1)) states this clearly and lists the actions required to achieve this. Articles 28 & 29 (ex Art. 30 & 34)4 prohibit Member States from imposing quantitative restrictions on imports and exports respectively. By Article 90 (ex Art. 95) the Treaty halts internal taxation of imports which would produce an equivalent effect to that of customs duties.5 * Derogations The Treaty, however, provides Member States with the ability to derogate from the rules governing trade. Most significantly Member States can restrict imports and exports under Article 30 (ex Art. 36), on specific grounds, namely; * public morality;6 * public policy;7 * protection of industrial and commercial property, and for;8 * public security (which encompasses) the;9 * protection of health and life of humans, animals and plants, or the;10 * protection of national treasures possessing artistic, historic, archaeological value.11 Given the importance of the 'fundamental principle'12 for the free movement of goods, it is unsurprising to find that invoking Article 30 will be ...read more.

Measures that discriminate directly can only be justified under Article 30 whilst, where necessary, indistinctly applicable and non-discrimination measures are able to seek justification on the expanding grounds of 'mandatory requirements'.67 * Necessity The causal link between the Member State's measure and their objective aims are defined in terms of necessity, "whilst the least trade restrictive character of the measure is called proportionality"68 Notaro points out that, in fact, the 'concept of necessity'69 has the causal link and least trade-restrictive elements built in because, 'a measure for which a less restrictive alternative exists is not, strictly speaking, needed'.70 The Crayfish case highlights the sometimes-difficult process of isolating the proportionality of national regulation out from that of their health or environmental aims. Moving toward a definition and use of a necessity test, as opposed to one of proportionality, could bring benefits to judicial rulings. Reducing the need for the courts to analyse and balance the proportionality of the objective aims for national measures against that of other measures could positively affect, in particular, the area of environmental protection, and consumer protection. In the Danish Bottles71 case the court declared their preference for the lower level of environmental protection coupled with a less restrictive effect on trade; rather than the more restrictive effect on trade, but offering greater environmental protection. Would this decision have been different had a test of necessity been employed instead? * Food safety According to the courts economic grounds can never serve as justification for barriers to trade. Indeed derogations are considered to be non-economical in nature.72 It is expected that derogations will assist in balancing 'the needs of a single market against that of the public security interests of the Member States'.73 It should be noted then that a Member State cannot nullify a breach by another Member State by adopting unilaterally protective measures.74 An understandably common justification for derogation in relation to food products, is that of consumer protection. ...read more.