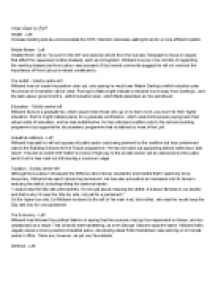 How Red Is Ed Miliband?

﻿How Red Is Ed? Health - Left Increase funding and de-commercialise the NHS. Wants to decrease waiting times for a more efficient system. Middle Britain - Left Insisted there will be ?no lurch to the left? and used an article from the Sunday Telegraph to focus on issues that affect the ?squeezed middle [classes], such as immigration. Miliband may be more mindful of neglecting the working classes (as New Labour was accused of) but recent comments suggest he will not overlook the importance of New Labour?s natural constituency. The deficit - Solidly centre left Miliband has not made his position clear yet, only saying he would use Alistair Darling?s deficit reduction plan. His choice of Chancellor will be clear. Picking Ed Balls might indicate a decisive move away from Darling?s - and the last Labour government?s - deficit reduction plan, which Balls described as ?too ambitious?. Education - Solidly centre left Miliband favours a graduate tax which would mean those who go on to earn more, pay more for their higher education. But he might instead plump for a graduate contribution, which would limit people paying back their actual costs of education, and be less redistributive. ...read more.

He is believed to favour a cheaper alternative, which would align him with the Lib Dems, as opposed to the like-for-like replacement (or scraping altogether). His brother accused him of ?having it both ways? over Trident during the campaign. ?Throughout this leadership election I have been clear that I believe the right approach is to include the decision about the replacement of Trident in the strategic defence review.? Scrapping Trident has acquired a totemic significance for left-wingers, both in the Labour party and the Liberal Democrats. Ed Miliband doesn?t favour ditching it outright, but he doesn?t want a like-for-like replacement either. He has been known to have been in favour of a cheaper alternative , but he hasn?t yet nailed his colours to the mast on whether Britain should build new submarines or a more economical land-based alternative. Foreign Policy - Left Ed Miliband differentiated his own position and that of his brother during the campaign by saying Labour got it wrong on Iraq. he was no an MP so did not vote on whether Britain should go to war but said weapons inspectors should have been given more time and the way in which Britain decided to go to war led to ?a catastrophic loss of trust? in Labour. ...read more.

He has indicated he would be reluctant to attack coalition efforts to curb the prison population, suggesting an important refinement of New Labour’s reflexive ‘tough on crime’ position. Employment - Wants to increase the availability of public sector jobs to solve unemployment. Living Wage - Left “People shouldn’t just be paid a minimum wage of £5.80 an hour. I want to move towards a living wage of more than £7 an hour. You would make a tax cut for business conditional on them paying a living wage.” It’s a policy you would consider left-leaning – until you realise it’s one espoused by the Conservative London Mayor Boris Johnson. He’s already increased the Capital’s living wage to £7.60 last year. Verdict - Middle left Ed Miliband certainly wooed the left during his campaign – and reaped the rewards when the unions handed him the votes which counted. But he vowed to appeal to the “squeezed middle”. That’s nothing to do with supportive hosiery and everything to do with positioning himself on the centre ground. Many of the new leader’s policies are still too unformed to know with any certainty exactly where on the political spectrum he’ll sit. Edging away from Blairism and New Labour - in favour of abandonment of Blair/Brown policies and in favour of more leftist versions. ...read more.