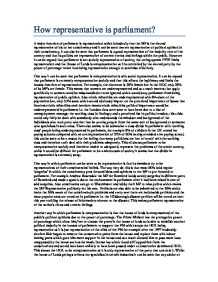 How representative is Parliament?

the Hillsborough disaster petition will be voted on later this year entitling the release of information relevant to the disaster. This makes parliament representative of the nation's views and current feelings. Another way in which parliament is unrepresentative is that the house of lords is unrepresented of the public's political opinions due to the power of patronage. The Prime Minister has the prerogative power of patronage which allow him/her to choose the peers in the house of lords so is able to establish another political majority in the houses of parliament to support the PM which stops the HOL being representative as it is just representative of the allies of the PM for example after the 1997 leadership election Blair began to remove the conservative peers from the house and replace them with labour leaning peers which gave him more support in the house and as a result allowed him to pass more laws unopposed by the house such as the music license law which faced stiff opposition from the conservatives and would have been unlikely to have been passed under a conservative dominated HOL. This shows the HOL to be unrepresentative as it is only representative of the party that controls it. Whilst the house of Lords perhaps reflects the specialists in certain industries it can be seen that any advice or scrutiny given would have their own political spin on it ...read more.

More recently however, the conservative party have also found themselves to be under-represented in their seats in proportion to their percentage of the vote i.e. in 2005 they received 33% of the vote but, only got 31% seats whilst not a large number of difference it shows that there was inadequacies in proportionality in voting , FPTP also prevents some seemingly well supported parties such as the green party and UKIP from being represented at all in the HOC as they are not supported all in the same area with spread out support unlike the SDP, Plaid Cymru and Sinn Fein due to their intense regional support. This shows parliament to be unrepresentative of the votes of the people and the political parties they vote for. In conclusion, in some respects parliament is representative such as through current affairs and such but it seems unless there is mass reform of the electoral system parliament will continue to be unrepresentative of minor parties' votes and unrepresentative of the people's political opinions constantly favouring the majority. There also needs to be mass reform of the HOL as it is unrepresentative politically of the country and is merely used as a tool by the PM to further influence policy. This is why parliament is unrepresentative. ...read more.