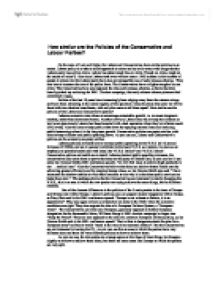 How similar are the Policies of the Conservative and Labour Parties?

How similar are the Policies of the Conservative and Labour Parties? On the issue of Law and Order, the Labour and Conservatives have similar policies to an extent. Labour policy is to take a stiffer approach to crime and try to do away with image that the Labour party was soft on crime. Labour has taken tough line on crime ("tough on crime, tough on the causes of crime"). Also since Labour took over we have seen a 10% increase in the number of people in prison, but the Labour party have also encouraged the use of early release schemes. They also aim to increase the size of the police force. The Conservatives have a slighter tougher line on crime. The Conservatives have also opposed the idea early release schemes, a theme that they heavily picked up on during the 2001. ...read more.

Conservative policies are pretty similar, with aims to keep inflation and public spending down. As you can see, Labour and Conservative's policies on the economy are pretty similar. Labours policies on health are to increase public spending on the N.H.S. (6.1% annual increases till 2004), and are in general committed to the basic N.H.S. as it stands, we also see an emphasis on primary health care with ideas like "N.H.S. Online" and "N.H.S. Direct". Conservative policies on health are to match Labours planned public spending increases, the conservatives also seem keen to prove that they are the party of Health Care, as you can see if you study Ian Duncan Smiths 2001 conference speech, "we will find ways to achieve high standards in our ... ...read more.

They also support the idea of a European Defence System, a "European Army". The Conservatives are more anti European, generally opposed to further European integration for the foreseeable future, Williams Hauge's 2001 election campaign's slogan was "Keep the Pound". They are also opposed to the idea of a common European Defence policy, as Ian Duncan Smith said in his 2001 conference speech "that is what is dangerous about the plan for a European army" and that it would "stand in the way of our national defence". But the Conservatives are not interested in leaving the EU. As you can see this an area in which the parties have very different aims and there for very different policies on how to achieve them. As you can see, the two parties on average agree on the ideas of most things, but disagree slightly as to how to achieve these ideas, but there are some areas like Europe on which the parties are very split. ...read more.