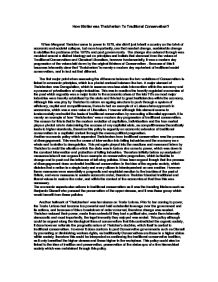 How Similar was Thatcherism To Traditional Conservatism?

How Similar was Thatcherism To Traditional Conservatism? When Margaret Thatcher came to power in 1979, she didn't just inherit a country on the brink of economic and societal collapse, but more importantly, one that needed change, sustainable change to stabilise the problems of the 1970's and past governments. The change she ushered through was moulded around a distinct ideology set on principles and beliefs that stemmed from the values of Traditional Conservatism and Classical Liberalism, however fundamentally, it was a modern day progression of the values laid down by the original thinkers of Conservatism . Because of this it becomes inherently clear that 'Thatcherism' is merely a modern day equivalent of traditional social conservatism, and in fact not that different. The first major point when assessing the difference between the two variations of Conservatism is linked to economic principles, which is a pivotal contrast between the two. A major element of Thatcherism was Deregulation, which in essence was less state intervention within the economy and a process of privatisation of major industries. This was in reaction the heavily regulated economies of the past which arguably was a major factor in the economic crises of the late 70's as most major industries were heavily subsidised by the state and this led to great inefficiencies within the economy. ...read more.

However these measures were essentially a pragmatic and empiricist reaction to the troubles of the past of Britain, and were measures to sustain economic order, therefore Thatcher blended traditional and liberal values to restore the order, and within the context of the economics at that time this was necessary. The economic aspects also adhere to traditional conservatism as it was the founding thinkers such as Benjamin Disraeli who pursued the preservation of the upper classes, and it was these group which would benefit from these policies. Another hallmark of 'Thatcherism' was her stance on Trade Unions. Prior to her coming to power, the Trade Unions had become too powerful and held substantial leverage over the government and its actions, and because of this a breakdown of order occurred, therefore change was needed. Thatcher reduced their power, made them unlawful if they had a political aim, made them internally democratic and most importantly, the legal immunity they enjoyed was ended. This policy although could be argued along the ideological lines of conservatism that this contradicted the organic society, it does however reiterate the pragmatic nature of Thatcher's doctrine, which itself is central to traditional conservatism. ...read more.

It also protected the interests of property and business owners as it insured property would be easier to keep. This was also yet again part of the neo-liberal policies which brought Britain out of crisis and into the capitalist arena of liberalism, which as the aforementioned areas policy show contradict traditional conservatism, but were an essential pragmatic measure by Thatcher. The last aspect of 'Thatcherism' is the rise of neo-conservatism. This aspect of the ideology places emphasis on patriotism, authoritarian stance on crime and also advocate the protection of 'traditional moral values'. This is in contrast to most aspects of the new right as it conforms to the usual characteristics of traditional conservatism. This continuation shows that in essence Thatcherism was traditional conservatism, yet with a pragmatic and empirical approach to the past problems of Britain in terms of socio-economics. What has been highlighted from the aforementioned aspects of 'Thatcherism' is that although it differs in many areas from traditional conservative thought, it adheres to a set of ideas that deny ideology and reject the dogmatic approach that other ideologies do. Therefore it is necessary to conclude that 'Thatcherism' is merely a modern equivalent of traditional conservatism, through its usage of political pragmatism and empiricism . ...read more.

The student answers the question well by pointing out areas where Thatcherism shows aspects of traditional conservatism and areas where it shows liberalism. Liberalism is not mentioned in the question, showing the student is knowledgeable as they have brought this ...

The student answers the question well by pointing out areas where Thatcherism shows aspects of traditional conservatism and areas where it shows liberalism. Liberalism is not mentioned in the question, showing the student is knowledgeable as they have brought this into the debate themselves. They stay on task for the whole essay and are always answering the original question - this shows that the student has enough knowledge to answer the question set and not the one they know the most about.

At some points the essay uses inaccurate evidence. For example, the student argues that trade union reform benefitted those high up in the workplace - which is very true - but in fact Thatcher's reforms were also supported by working-class Conservatives, as the reforms allowed the individuals who were against strikes to return to work. If the student made this point, they could link it back to classical liberalism and the celebration of the individual, which would help to answer the question as it would provide an alternative interpretation. However, the student clearly understands what they are discussing - for example, the references to Disraeli shows they can link the roots of the philosophy to how they exist in modern form. It's important not to mention too much history as it is not a history essay but mentioning it helps to answer this particular question as it has ''traditional'' in the title. The conclusion is good as it reaches a judgement, which shows that the student can assess the evidence and pick out which interpretation of Thatcherism is most likely to be correct. However, it is confused in some places: ''it adheres to a set of ideas that deny ideology'' is contradictory because ideology is a set of ideas. It is always good to re-read what you have written to make sure you haven't made an error or contradicted yourself. It could also be improved by repeating what they think is the most important piece of evidence, as this would show they can pick out which bit of what they have written is the most relevant.

The essay makes good use of political terminology such as ''empirical'' and ''pragmatic'', which is good as it shows that the student has the knowledge to explain things in academic terms rather than general terms. The essay has a style very good for an A Level essay, as it uses words like ''however'' which allow the student to bring in the other side of the argument.