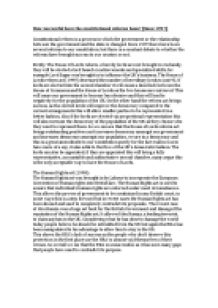 How successful have the UK constitutional reforms been since 1997?

﻿How successful have the constitutional reforms been? (Since 1997) Constitutional reform is a process in which the government or the relationship between the government and the state is changed. Since 1997 there have been several reforms to our constitution, but there is a constant debate to whether the reforms have brought success to our country or not. Firstly, The House Of Lords reform, whereby lords are not brought in via family, they will be elected a lord based on achievements and specialized skills, for example Lord Sugar was brought in to influence the UK?s business. The House of Lords reform act (1999) decreased the number of hereditary lords to just 92. If lords are elected into the second chamber it will cause a dead lock between the House of Commons and the House of Lords as the two houses are mirrored. This will cause our government to become less decisive and this will lead to negativity for the population of the UK. On the other hand the reform act brings success, as the elected lords will improve the democracy compared to the current arrangements this will allow smaller parties to be represented in a better fashion. Also if the lords are elected via proportional representation this will also increase the democracy of the population of the UK as they choose who they want to represent them. ...read more.

Also the Freedom of Information act also allows for the public access to governmental documentation, this is thought to have been one of the acts successes as it is working towards a more open government. But today information is so widely available that even our government is scared. Tony Blair said ?it?s the worst mistake of my life?. This reference to the Freedom of Information act clearly shows that MP?s cannot voice their true and legit opinions on matter without being scrutinized. They can be scrutinized via the media. The expenses scandal is a prime example. MP?s expenses were shown to the public and the media set off a huge firework and ripped certain MP?s via complete exposure, but from another perspective this can be seen as a positive as the FOIA stops corruption with funds and expenses. The FOIA also brings a few negatives. The easily obtainable information is a large reason to why MP?s don?t voice their opinion as they may also be pushed into the hot seat for saying something wrong. The lack of MP?s being open could have a negative impact on the way the country is run, as issues may not be rectified and discussed properly. So the two arguments are balanced but as you can see the positive effects of the FOIA are much larger, overall it ensures that MP?s don?t set foot out of line. ...read more.

So in 2003 the decision was taken to reform the judiciary. This brings its strengths and weakness? to whether the reform is regarded as successful. Firstly an advantage is the fact that the judiciary can claim to be fully independent this prevents any political influence upon the judiciary. The independence of the judiciary has improved via the reform as the government has less of an influence on the judiciary?s decisions. Secondly the reform eliminates the ambiguity of the role of the Lord Chancellor, this again separates the judiciary from the government, this brings great success as it portrays a much more democratic system and allows citizens to seek judicial advice easier than the previous system. Lastly the reform brings Britain into line with modern constitutional practice, the JAC was set up in the reform to insure that judges were put to power regarding their qualifications instead of political views. Overall we see the success of the reform through its increase in democracy and prevention of political influence. This reform supports Britain?s proposal of a modern democracy. Overall we see that the various reforms to our constitutions have been either successful or successful with slight gaps such as the HRA. Many argue for and against the post 1997 reforms. Our constitution allows for flexibility so as time continues the success of reforms shall increase. The reforms above mainly propose an increase in democracy and in many peoples views have delivered success. ...read more.