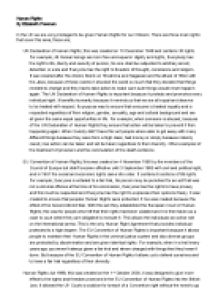 Human Rights Legislation and Citizens of the UK

﻿Human Rights By Elizabeth Freeman In the UK we are very privileged to be given Human Rights for our Citizens. There are three main rights that cover this area, these are; UN Declaration of Human Rights; this was created on 10 December 1948 and contains 30 rights. For example; All Human beings are born free and equal in dignity and rights, Everybody has the right to life, liberty and security of person, No one shall be subjected to arbitrary arrest, detention or exile and Everyone has the right to freedom of thought, conscience and religion. It was created after the Atomic Bomb on Hiroshima and Nagasaki and the attack of Hitler with the Jews, because of these events it shocked the world so much that they decided that things needed to change and they had to take action to make sure such things would never happen again. The UN Declaration of Human Rights is important because it protects and promotes every individual right. It benefits humanity because it reminds us that we are all equal and deserve to be treated with respect. Its purpose was to ensure that everyone is treated equally and is respected regardless of their religion, gender, sexuality, age and cultural background and are all given the same equal opportunities in life. ...read more.

The Police and Criminal Evidence Act is important because it makes sure that the individuals are not harmed during the time the police exercise their powers. This benefits both sides because it means that the Police can fulfil their duties and do what is needed of them and also the Publics Human Rights are respected. Date Protection Act; this was formed to protect the personal information of individuals, because of the incline in the amount of identification theft. Although because of this organizations are asking for more personal information so that we are able to prove our identity, making us more liable for identify theft to happen to use if there is misuse of this information. The act makes the Government have an obligation to protect the privacy of the Public and also to stop unauthorised access and misuse of this information. It is part of our Human Rights mentioned above to have privacy. This is very important because if the wrong people gain our personal information we are at risk of losing money, our houses and also may be at risk of getting in trouble with the law because someone else has stolen our identity and used it as their own. Although this does not always work, this is evident with the rise in forgery, fraud and identify theft. ...read more.

They are also in charge of dealing with anti social behaviour and people trafficking. The UK system although protects our Human and Legal Rights, it is sometimes shown that they miss certain things. With being one of the founders to the UN system they are often under a lot of pressure to ensure that everyone is given free education and healthcare. Although because of this system those that are actually illegal immigrants are still given the opportunity to be provided with free education. Although with so many legislations some of the small ones are often over looked. An anti discrimination legislation was overlooked once in a racial abuse case with Stephen Lawrence. A young black boy that was killed by white youth, the police did such a bad job with collecting the evidence that it was not allowed to be used in the courts. This resulting in the murderers to get away with their crime. Although despite the flaws of the system it also has been a significant benefit to the UK, allowing everyone to be rounded individuals that have been given different opportunities to ensure that they make the most of their lives, and are protected and kept from harm when needed. The Human and Legal Rights have allowed society to be a well balanced and equal environment to be in. ...read more.