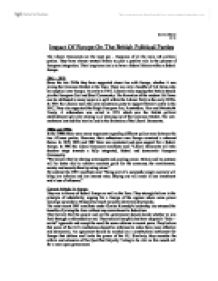 Impact Of Europe On The British Political Parties

Javeria Masud 12 O Impact Of Europe On The British Political Parties The Liberal Democrats are the most pro - European of all the main UK political parties. They have always wanted Britain to play a positive role in the process of European integration. Their long-term aim is to have a federal Britain within a federal Europe. 1945 - 1979 Since the late 1950s they have supported closer ties with Europe, whether it was joining the Common Market or the Euro. There are only a handful of Lib Dems who are sceptical over Europe. As early as 1951, Liberals were arguing that Britain should join the European Coal and Steel Community. ...read more.

The anti-marketers lost and this later on lead to the formation of the Liberal Democrats. 1980s and 1990s In the 1980s there were many arguments regarding different policy areas between the two Alliance parties. However, their enthusiasm over Europe remained a coherent theme. In 1979, 1983 and 1987 there was consistent and open support for a federal Europe. In 1992 the Liberal Democrat manifesto read: "Liberal Democrats will take decisive steps towards a fully integrated, federal and democratic European Community. "We believe that by sharing sovereignty and pooling power, Britain and its partners will be better able to achieve common goals for the economy, the environment, society and security than by acting alone." ...read more.

The most recent 2001 manifesto under Charles Kennedy's leadership also stressed the benefits of joining the Euro without any commitment to federalism. They believe that the people and not the government should decide whether to join Euro through a referendum or not. They remain Europhile but have adopted a "Euro -realist" approach and accept the need for some reforms in recent years. They believe that some of the EU's institutions should be reformed to make them more effective and democratic. An agreement should be reached on a constitutional settlement for Europe that defines and limits the power of the EU. Similarly, they consider the reform and extension of the Qualified Majority Voting to be vital as this would call for a more open government. ...read more.