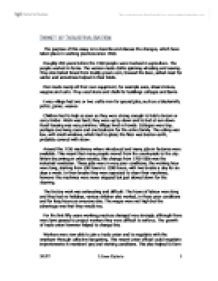 Impact of Industrialisation - The purpose of this essay is to describe and discuss the changes, which have taken place in working practices since 1960.

IMPACT OF INDUSTRIALISATION The purpose of this essay is to describe and discuss the changes, which have taken place in working practices since 1960. Roughly 200 years before the 1960 people were involved in agriculture. The people worked in farms. The women made cloths spinning wheeling and sewing. They also baked bread from locally grown corn, brewed the beer, salted meat for winter and sometimes helped in their fields. Men made nearly all their own equipment, for example axes, shears knives, wagons and carts. They used stone and chalk for buildings cottages and barns. Every village had one or two crafts men for special jobs, such as a blacksmith, potter, joiner, weaver. Children had to help as soon as they were strong enough to hold a broom or carry timber. Work was hard; they were up by dawn and to bed at sun down. Rural housing was very primitive. Village lived in hovels. Cottages were tiny, perhaps one living room and one bedroom for the entire family. The ceiling was low, with small windows, which had to glass; the floor was beaten earth, probably covered with straw. Around the 1750 machinery where introduced and many jobs in factories were available. This meant that many people moved from the countryside to the city. Britain becoming an urban society, this change from 1700-180o was the industrial revolution. These jobs were in very poor conditions, the working hour were long, starting from 530 hours to 1930 hours, with two breaks a day for six days a week. ...read more.

The use of computers to generate and store information for wide variety of uses is known and information technology. Computer-aided manufacturing (CAM and Computer-aided design (CAD) are the latest method of automated production in which design, manufacturing and management are all linked electronically and aided, or controlled by computers. For example CAM in the process industries such as paint manufacturing computers control the temperature and the rate of flow. As well in engineering, computer program machines to drill holes in metal to the precise depth required. Computer-aided design (CAD) makes it possible to design products on the screen of a visual display unit. This avoids having to build expensive models of bridges or aircrafts and makes the design process much quicker and cheep, with possible chances of retouch. Computer Integrated Manufacturing (CIM), the combination of both CAM and CAD developments. The labour force can often be cut 90 per cent with output the same. Machinery can also be cut back and quality control improved. Another advantage of CIM is flexibility. It is possible that the mass production of a single product on assembly lines may disappear. With a return to batch production with these flexible manufacturing system making a variety of parts and products with much less waiting time between process than there was in the past. However a small disadvantage on CIM is that it needs a very large capital investment and careful planning. ...read more.

This helps develop leadership and presentation skills as well as enabling people to understand, acknowledge and learn from others. Nissan do a lot to promote a team identity whose workers have pride in producing a good car. There have been some major changes in the level of part -time working. As well as the work force increase up from 27.5 million in 1986 to 29 million in 1995. Another trend involves changes in the type of output produced. This has affected many industrial countries in a similar way. Employment in traditional heavy industries such as coal, steel and shipbuilding had shrunk. However jobs have opened up in services. This being structural change. A Since 1979 over 2 million jobs have been lost in manufacturing, while 2.4 million jobs have been created in the service sector. This major restructuring of the UK labour market has effectively removed some of the traditional male strongholds of employments. Many of the jobs created in services, particularly those that are part time, suit women rather than men. British workers put in by far the longest hours in the European Union and Britain is the only member state where the length of the working week has increased over the past decade, according to latest statistics of the European Commission. The average British working week, including overtime, is 43.4 hours, more than an hour longer than in 1983. British women work weekly stakes with average of 40.2 hours compared with 38.8 hours in 1983. 1 1 5/1/07 Liliana Guilarte ...read more.