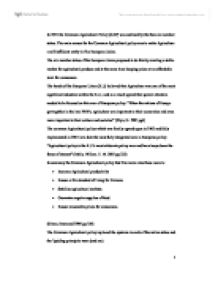 Tony Blair was very much opposed to this as it would be in the interests of the U.K to reform the Common Agricultural Policy as it would be for the other industrialised countries such as Germany and Sweden. As mentioned earlier the "Wine Lakes" and "Food Mountains are a source of much controversy for the Common agricultural policy. It is often cited by critics of the policy that the common agricultural policy is no longer viable and no longer a relevant policy in the European Union. "The conditions that led to its creation no longer exist" (Jones, R. 2000 pg 213). Cap was designed so that the E.U could become self sufficient in its production of Agriculture produce. It has fulfilled this aim but now over produced leading to an overwhelming surplus of Agriculture produce i.e. "Food Mountains" and "Wine Lakes". This is a source of huge controversy when one considers the plight of many nations due to famine and food shortages as much of this surplus is often destroyed or released on to global markets which often has a detrimental effect on global markets. The "Food Mountains" and "Wine lakes" are the source of an eminent waste of food as well as a huge financial strain on the E.U budget with the cost of transportation and storage as well as damage to foreign markets when the goods are released onto them. ...read more.