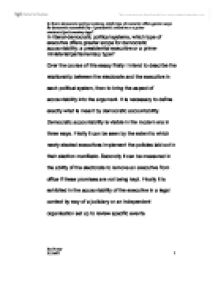 In liberal-democratic political systems, which type of executive offers greater scope for democratic accountability: a presidential executive or a prime-ministerial/parliamentary type?

In liberal-democratic political systems, which type of executive offers greater scope for democratic accountability: a presidential executive or a prime-ministerial/parliamentary type? Over the course of this essay firstly I intend to describe the relationship between the electorate and the executive in each political system, then to bring the aspect of accountability into the argument. It is necessary to define exactly what is meant by democratic accountability. Democratic accountability is visible in the modern era in three ways. Firstly it can be seen by the extent to which newly elected executives implement the policies laid out in their election manifesto. Secondly it can be measured in the ability of the electorate to remove an executive from office if these promises are not being kept. Finally it is exhibited in the accountability of the executive in a legal context by way of a judiciary or an independent organisation set up to review specific events. When analysing the scope for accountability within the presidential system the main area of interest is the relationship between the President and the legislature. Primarily I intend to focus on the American presidential system although useful examples can be drawn from other democratic systems. A President is given more individual powers by the state than a Prime Minister. When the population directly elects the President it can be said that this is a major reason for the powers of governance they receive such as commander in chief of the armed forces. ...read more.

The crucial difference is the make up of the rest of the executive, known as the cabinet in parliamentary systems. The prime minister as in presidential systems selects the cabinet. However he is only able to select members of parliament that have been won their seat via the election process. This mean that the electorate has to some extent the ability to influence who the cabinet will be made up of. In reality it is often the case that leaders will put potential cabinet ministers in 'safe' constituencies where their election is guaranteed. The executive, as in presidential systems has to have policies ratified by the legislature before they can be implemented. In reference to the cabinets requirement to gain ratification of tax reforms from parliament "the tax imposers are sure to quarrel with the tax requires." (Bagehot:1992:67) This could lead to the adaptation of the reforms to fit the views of the publicly elected legislature, which is in the interests of the electorate. Conversely it could lead to a situation of gridlock seen in the American presidential system. Here the electorate can be seen to be missing out in a similar way to the American electorate due to the fact that the blame for poor policy execution can be laid at the door of the legislative as a whole. The parliamentary system has one major advantage in this respect as the cabinet can threaten the legislature with dissolution if progress is not being made. ...read more.

An example of this in the American presidential system is the case of Donald Rumsfeld v. Jos� Padilla & Donna Newman. This case is regarding the legality of holding 'terrorist' prisoners in a manner that breaks principle human rights laws in Guantanamo Bay. In the UK issues are rarely referred to the judiciary. This is principally due to the lack of a written constitution. In Germany and the Netherlands the judiciary is stronger and plays a greater role in the regulation of the actions of the legislature. To conclude I have come to the conclusion that the epitome of democracy, and therefore democratic accountability is a parliamentary system with a proportionally representative voting system. Although slower, progress made in the multi party systems is more representative of the views of the electorate. This is because members of different parties have to come to equally agreeable decisions that are more representative of the views of the electorate as a whole. "All members of the coalition have an incentive to co-operate if they do not want the government of the day to fall. In these circumstances democracies with four, five or six parties in the legislature can function quite well." (A. Stepan, C.Skach 1993:20) Parliamentary systems also give a clearer picture to the electorate of the processes of discussion of the legislature. This in turn means that when an election is called the electorate is able to exercise their democratic right to remove those responsible for not best representing their interests. ...read more.