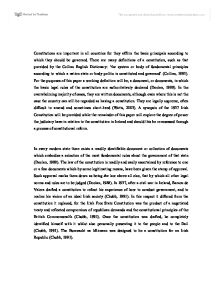 Constitutions are important in all countries for they affirm the basic principals according to which they should be governed. There are many definitions of a constitution, such as that provided by the Collins English Dictionary: 'the system or body of fundamental principles according to which a nation state or body politic is constituted and governed' (Collins, 1995). For the purposes of this paper a working definition will be; a document, or documents, in which the basic legal rules of the constitution are authoritatively declared (Doolan, 1988). In the overwhelming majority of cases, they are written documents, although even where this is not the case the country can still be regarded as having a constitution. They are legally supreme, often difficult to amend and sometimes short-lived (Watts, 2003). A synopsis of the 1937 Irish Constitution will be provided while the remainder of this paper will explore the degree of power the judiciary have in relation to the constitution in Ireland and should this be re-assessed through a process of constitutional reform. In every modern state there exists a readily identifiable document or collection of documents which embodies a selection of the most fundamental rules about the government of that state (Doolan, 1988). The law of the constitution is readily and easily ascertained by reference to one or a few documents which by some legitimating means, have been given the stamp of approval. ...read more.

The Irish constitution, like most constitutions, is considered to be rigid - that is, less easily amended than ordinary legislation (Coakley and Gallagher, 2005). Ireland is one of the few countries where every constitutional amendment requires the consent of the people via referendum. The 1980's brought about a referendum which caused deep division within, as well as between the parties. Article 40.3.3 was amended in 1983 and inserted what its proponents termed a 'pro-life' amendment, to the effect that the state acknowledges the right to life of the unborn, and undertakes by its laws, to defend and vindicate that right (Coakley and Gallagher, 2005). However, the 'X' case, which arose in early 1992, concerned a 14 year old girl who had become pregnant, allegedly as a result of being raped. She intended to travel to Britain to obtain an abortion, but the Attorney General, the legal adviser to the government, obtained a High Court injunction to prevent her travelling out of the country, on the grounds that she intended to terminate the life of her unborn child, which he believed would be in direct violation of Article 40.3.3 of the constitution (Coakley and Gallagher, 2005). This decision caused uproar in Ireland and earned the country unfavourable international publicity. ...read more.

Of course there must be some institution or persons that can give an authoritative interpretation. Also, it should not be imagined that the constitution can be changed only by amending it. Rather, there is another important procedure to be considered in this respect, namely judicial interpretation (Chubb, 1978). Therefore, presented with the cases in this paper it would seem that the judiciary indeed do have the power to shape the constitution through their interpretation of it. For example, the pro-lifers 'assumed' that the 1983 amendment would cover all aspects of outlawing abortion, although this wasn't to be the case after judicial interpretation. With the cases presented it could be argued that the judiciary were indeed shaping and developing the constitution, However, it could also be argued that they were doing so against the wishes of the people. My opinion is as long as it can be shown that the judiciary are not abusing this power and are seen to be further developing the constitution, in that they are keeping it in line with the trends of today's society, then that can only be a good thing to keep it alive and vibrant. Constitutional reform on the go. In light of some judicial decisions since 1960 should the power of judges in relation to the Irish Constitution of 1937 be re-assessed Steven McMaster B.I.F.H.E. ...read more.