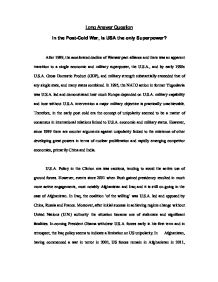 In the Post-Cold War, is USA the only Superpower?

Long Answer Question In the Post-Cold War, is USA the only Superpower? After 1989, the accelerated decline of Warsaw pact alliance and there was an apparent transition to a single economic and military superpower, the U.S.A., and by early 1990s U.S.A. Gross Domestic Product (GDP), and military strength substantially exceeded that of any single state, and many states combined. In 1995, the NATO action in former Yugoslavia was U.S.A. led and demonstrated how much Europe depended on U.S.A. military capability and how without U.S.A. ...read more.

U.S.A. Policy in the Clinton era was cautious, tending to avoid the active use of ground forces. However, events since 2001 when Bush gained presidency resulted in much more active engagements, most notably Afghanistan and Iraq and it is still on-going in the case of Afghanistan. In Iraq, the coalition 'of the willing' was U.S.A. led and opposed by China, Russia and France. Moreover, after initial success in achieving regime change without United Nations (U.N.) authority the situation became one of stalemate and significant fatalities. ...read more.

However, successfully implementing U.S.A. power is more difficult in reality, highlighted by recent foreign and defence policy issues. Certainly, in terms of weapons and air power the US is still militarily dominant currently. Moreover, US economic power is not likely to be overtaken imminently. Its population will approach half a billion by 2050 allied to a high standard of education and technological competence. Therefore, rather than being surpassed by others, others are relatively growing quickly. Furthermore, in the short to medium term, other great powers are likely to counter weigh U.S. power in a more multi-polar context. ?? ?? ?? ?? ...read more.