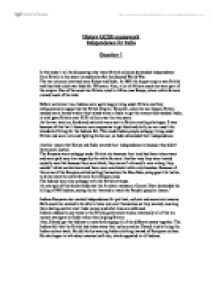 In this essay i will be discussing why many British colonies demanded independence from Britain in the years immediately after the Second World War.

History GCSE coursework Independence for India Question 1 In this essay i will be discussing why many British colonies demanded independence from Britain in the years immediately after the Second World War. The two colonies involved were Kenya and India. In 1900 the largest empire was British and they had ruled over India for 200 years. Also, a lot of African countries were part of the empire. One of the countries Britain ruled in Africa was Kenya, where white farmers owned much of the land. Before world war two, Indians were quite happy living under Britain and they enthusiastically supported the British Empire. However, when the war began, Britain needed more money and so they raised taxes in India to get the money they needed. India, in total gave Britain over �120 million over the two years. As the war went on, foods and materials were sent to Britain creating shortages. It was because of this that it became more expensive to get food and cloth, so as a result the standard of living for the Indians fell. This made Indian people unhappy living under British and soon riots and fighting broke out, as India demanded their independence. Another reason that Kenya and India wanted their independence is because they didn't have social justice. ...read more.

In the 1940's people began talking about the 'united states of Europe.' This meant that the American led west Europeans combined together to form a superpower. The ECSC stood for 'European coal and steel community.' It was set up so that the coal industries on both sides of the river Rhine could work together easily. The six members of the ECSC were France, West Germany, Belgium, Holland, Luxemburg and Italy. They agreed to put all coal and steel production under a joint authority on which all six governments could be represented. In the 1950's the success of the ECSC led to the setting up of the EEC (European Economic Community.) It had the same six members as the ECSC and it was organised to so that there was free trade between the six countries. There were 180 million people in all six countries and so the manufacturers would have a very big market to sell to. There was also a council of ministers set up, to have control of the new system, and a commission of officials were used to run it. Britain decided not to join the EEC and instead to join the rival organisation of the EEC, EFTA (European trade association.) the main reason they didn't the EEC was because Britain saw them selves as a world power, not a European one. ...read more.

However, so far, Britain hasn't joined. In this section I will be discussing how the EEC has affected Britain socially and culturally. One way it has affected us is that 10 % of money from the EEC goes towards helping poorer areas of Europe, where there is high unemployment and homelessness. Also, 7 % of EEC money goes towards building schemes and training of the unemployed. Being part of the EEC has affected us socially because the EEC countries now trade with poorer countries. Britain and France still trade with countries that used to be in their empire. They give them foods, and manufactured goods to pay for roads, schools and hospitals in third world countries. At first this seems a good idea but high interest rates makes poorer in the long run. Another way it affects us culturally is that we have EEC passports instead of British ones which allows us to travel freely around EEC countries and even get a job there. I conclusion, the British was effected in many ways by the EEC. In my opinion, the most important effect has been the economic effect. This is because it has given farmers more profit as they have a bigger market to sell to. The negative effect of the EEC is that even though we give money to third world countries, it actually makes them poorer because of high interest rates. ...read more.