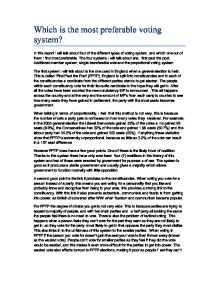 In this report I will talk about four of the different types of voting system, and which one out of them I find most preferable.

Which is the most preferable voting system? In this report I will talk about four of the different types of voting system, and which one out of them I find most preferable. The four systems I will talk about are; first past the post, Additional member system, single transferable vote and the proportional voting system. The first system I will talk about is the one used in England when a general election is held. This is called 'First Past the Post' (FPTP). England is split into constituencies and in each of the constituencies a candidate from the different parties stands to get elected. The people within each constituency vote for their favourite candidate in the hope they will get in. After all the votes have been counted the new consistency MP is announced, This all happens across the country and at the very end the amount of MP's from each party is counted to see how many seats they have gained in parliament, the party with the most seats becomes government. When talking in terms of proportionality, I feel that this method is not very, this is because the number of sets a party gets is not based on how many votes they received. ...read more.

This also opens up the degree of choice for people, as they are not limited to one vote, and the fact they have an extra vote opens up the possibility of having both, your favourite MP in your area and your favourite party in power, both of whom do not have to be from the same party. This system is also much fairer on smaller parties. This is thanks to the top up seats that the list system provides meaning there is a chance for them to get into parliament, but not have too much power if they are extremist parties. All these positive points would also affect turnout results, boosting them as people don't have to worry quite so much about wasted votes and tactical voting (through there is still the opening for both in this system). However there is one shortcoming for this system that stems directly from the second ballet. This being, which the MPs who are brought in through the second ballet don't look after a constituency and so are floating MP's. This is a concern as no one knows who they are or what their effects will be in parliament, or even what they believe and their ideologies. ...read more.

This would be due to the fact that MP's from different parties would have to be spread out after the election to see how many seats each party had gained. The proportional representation system is very fair on smaller parties and this is because of the high degree of choice it offers, and the possibility for any party to gain seats. However this is not always a good thing as it would pave the way to allow extremists into parliament. So in conclusion to my report I feel I have noticed an emerging pattern. The more proportional a system gets, the more likely a coalition is and the higher the choice levels and fairness to smaller parties. In comparing all these advantages and short comings, I feel the best system is the additional member system. This is because although it is not as proportional as STV or proportional representation it does allow for some proportionality. It also may allow more coalitions however when compared to the Italian government whom use Proportional Representation, the governments produced will be stable and will still allow bills to be passed. AMS also allows the strong constituency link to be maintained, as that is a big part to voters who like to know who is looking after their area. ...read more.