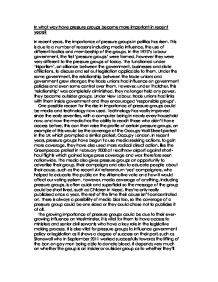 In what way have pressure groups become more important in recent years?

In what way have pressure groups become more important in recent years? In recent years, the importance of pressure groups in politics has risen. This is due to a number of reasons including media influence, the use of different tactics and membership of the groups. In the 1970's Labour government, the first 'pressure groups' were formed, however they were very different to the pressure groups of today. The functioned under 'tripartism', an alliance between the government, businesses and state affiliations, to discuss and set out legislation applicable to them. Under the same government, the relationship between the trade unions and government grew stronger; the trade unions had influence on government policies and even some control over them. However, under Thatcher, this 'relationship' was completely diminished, they no longer held any power, they became outsider groups. Under New Labour, trade unions had links with them inside government and they encouraged 'responsible groups'. One possible reason for the rise in importance of pressure groups could be media and technology now used. ...read more.

However, media coverage of anything, including pressure groups, is often quick and superficial so the message of the group could be short lived, such as Children in Need, they're only really publicised once a year, the rest of the time their cause isn't concentrated on. There is always a possibility of media bias too, so the coverage of a pressure group could be one sided or they could chose not to publicise it at all. The growing importance of pressure groups could be due to their ever-growing influence on Westminster, it is vital for them to have access to ministers and senior civil servants who have a key role in the legislative making process. It is also vital for pressure groups to influence government policy or legislation as it shows a degree of success on their part, such as Stonewall who in September 2011 worked successfully towards the lifting of the ban on gay men being able to donate blood. ...read more.

An example would be the 2003 Anti-Iraq war march in London that attracted over one million protesters and Occupy London which is currently protesting against capitalism outside St. Pauls Cathedral in Central London. Some 'radical' pressure groups have come to favour methods of direct action over more traditional methods that they feel are likely to be ineffective. An example would be the ALF (Animal Liberation Front) using radical methods such as in January 2009, where they vandalised a Bradford councillor's car with acid because she was said to have supported the proposed bill of being able to go shooting on a nearby moor. However, direct action can also disrepute the movement, for example Charlie Gilmore 'swinging' on the cenotaph during the NUS demonstration in 2010, which gave the press an opportunity to condemn the pressure group. Direct action does gain a lot of publicity for the pressure groups, making the public and the government more aware of them and helping to increase their support, however, the government don't necessarily always listen. ...read more.