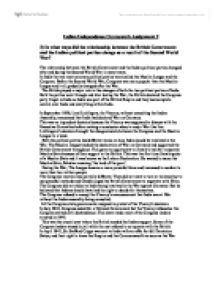 Indian Independence Coursework Assignment 2 2) In what ways did the relationship between the British Government and the Indian political parties change as a result of the Second World War? The relationship between the British Government and the Indian political parties changed after and during the Second World War in many ways. In India the two most common political parties were called the Muslim League and the Congress. Before the Second World War, Congress was more popular than the Muslim League and it all gradually changed after the War. The British played a major role in the changes of both the two political parties of India. Both the parties went through and later during the War, the British declared the Congress party illegal in India as India was part of the British Empire and they had complete control over India and everything within India. In September 1939, Lord Linlithgow, the Viceroy, without consulting the Indian Assembly, announced that India had declared War on Germany. ...read more.

The Congress did not object to India being involved in the War against Germany. But he believed that Indians should have had the right to decide for themselves. The Congress refused to accept the Viceroy's announcement that India was at War without the Indian assembly being consulted. All the Congress state governments resigned in protest of the Viceroy's decision. In July 1940, Congress asked for a National Government but the Viceroy refused so the Congress started civil disobedience .This event made most of the Congress leaders arrested in 1940. This was the crucial year where the British needed the Indian support. Some of the Congress leaders stayed in jail while the rest refused to co-operate with the British. In April 1942, Sir Stafford Cripps was sent to India with an offer for full Dominion Status, and their right to leave the Empire and the Commonwealth as soon as the War was over. Also, he said that anyone that did not want to stay in India should become an Independent country. ...read more.