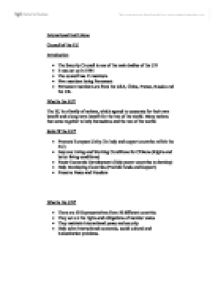 International Institutions - Council of the EU.

International Institutions Council of the EU Introduction * The Security Council is one of the main bodies of the UN * It was set up in 1945 * The council has 15 members * Five members being Permanent * Permanent members are from the USA, China, France, Russia and the UK. What is the EU? The EU is a family of nations, which agreed to cooperate for their own benefit and a long-term benefit for the rest of the world. Many nations that come together to help themselves and the rest of the world. Role Of the EU? * Promote European Unity (To help and support countries within the EU) ...read more.

"To take military action against an aggressor". "To recommend the admission of new members". There are more roles than this but they mainly fit into the ones I have mentioned above. The Structure There are six principals of the United Nations they are: * The General Assembly * Security Council * Economic and Social Council * Trusteeship Council * International Court of Justice and Secretariat How decisions have affected the UK Public Services Many decisions have affected the European union and a fact is that new laws and regulations passed by the British parliament are brought into the UK because the EU has passed similar laws in Brussels. ...read more.

Forty five thousand refugees and asylum seekers from the Middle East passed through their way through the camp on the way to Britain and eight five percent stayed in Britain. Complaints from the UK were maid and the French government closed the camp only to say that Britain will take the remainder off the refuges still within the camp. The immediate effects on the Public Services was that more policing was needed on the channel ports, More work for the immigration officers to process the immigrants documents and more work for the National Asylum Support Service who organise accommodation and supply vouchers to the asylum seekers. I found this information from the National Public Services book by Nick Cullingworth. Sahil Rattan ...read more.