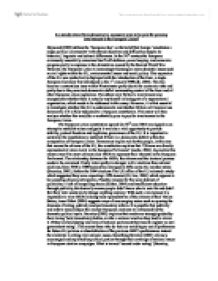 Is a steady retreat from democracy a

Is a steady retreat from democracy a necessary price to be paid for growing involvement in the European Union? Heywood (2002) defines the 'European idea' as the belief that Europe 'constitutes a single political community' with shared objectives and difficulties despite its historical, linguistic and cultural differences. In the 20th century the European community essentially concerned itself with defence, peace keeping, and economic progress partly in response to the devastation caused by the Second World War. However, the European Union is increasingly focusing on more domestic issues such as civil rights within the EU, environmental issues and social policy. This expansion of the EU was symbolically displayed with the introduction of the Euro, a single European Currency first introduced in the 1st January 1999 (dti, 2005). This has become a contentious issue within Westminster partly due to the economic risks and partly due to the perceived democratic deficit surrounding control of the Euro and all other European Union legislation. The debate over Britain's involvement also encapsulates whether there is actually any benefit in being part of a supranational organisation, which needs to be addressed in this essay. However, it is first essential to investigate whether the EU is undemocratic and whether Britain will become less democratic if it is fully subjected to a European constitution. This essay will then analyse whether this would be a worthwhile price to pay for involvement in the European Union. ...read more.

As the 'decision-making' (Heywood 2001) branch of the EU The Council of Ministers are responsible for initiating the process of turning the guidance of the EC into specific proposed policies and laws, however they are appointed rather than elected; held accountable through 'their own assemblies and governments' (Heywood 2001) and therefore not directly by the citizens of the EU. Pollack (2003) states that this is not the only legitimacy crisis within the EU as the method used to reach decisions is qualified majority voting which means not all ministers have to agree which creates the prospect of legislation 'that runs counter to the interests of member state governments and their electorates' (Pollack, 2003). However, qualified majority voting does speed up legislation and member states are able to opt out of some laws such as the introduction of a Single European Currency. The EU does appear to have a separation of powers which invites pluralist debate and constrains the possibility of domination. However, it would perhaps be in the interest of the electorate if more decisions originated from the European Parliament because of the legitimacy the elections give. However the current position of the EP has improved although Dykes (2003) states this as being an 'evolutionary process' he recognises the inter-institutional conference in 1992 as raising the issues of democracy, transparency and conciliation. ...read more.

However, in my opinion even with the constitution the EU is still flawed in its representation of the citizens of its member states. Poor electoral participation and the insufficient linkage between the electorate and the policy-making areas of the EU need to be addressed (Kitkat, 2004). The growing potency of the European Parliament clearly adds legitimacy to the EU; it is important that actions like these remain on the agenda, as it is possible discussions of democratic accountability will stagnate now the EU constitution has been signed. The European Union appears to have an elitist past which has conceded to change through the introduction of more member states and the expansion of the use of qualified majority voting which is more progressive that vetoing legislation (Bromley, 2001).. Evidently the political culture of the EU needs to change as much as its institutions and laws. I believe that a retreat from democracy is never an acceptable or necessary step for the benefit of being part of a supranational body. Particularly when so many improvements can be made, if the UK government feels the EU is undemocratic it is possible to highlight the democratic deficit that exists. It may be true that intergovernmental activity will be reduced in a more integrated Europe; however the loss of sovereign power is not necessarily the loss of democratic legitimacy as it is always possible for a connection between the electorate and state or supranational body. ...read more.